A fan obsessed with the well-known phrase “Norman Reedus bite me,” did just that – she bit the star and was kicked out of a convention. Earlier this week, thousands of fans gathered at the annual Walker Stalker Con at the Meadowlands Exposition Center in Secaucus, New Jersey to meet their favorite star, Norman Reedus of The Walking Dead. Followers of the character Daryl Dixon posed for selfies, chatted with Reedus, and he gladly signed autographs.

However, as fans of the AMC horror drama series know, many women have this fantasy of Reedus biting them, one lady, who had been dreaming of feeling the star’s bite is Robin Grover. After meeting Reedus and taking a picture with him, she turned and bit him on the chest.

The police and security guards were immediately called to the scene, but the biter was not arrested per Reedus’ request. Reedus told authorities that he was not physically harmed during the attack and refused to press charges against the mad woman. Reedus, who has a habit of licking some of his fans, also declined to go to the hospital and continued greeting fans.

Organizers of the event said the woman has been banned from all future Walker Stalker conventions and other sponsored events where Reedus is present. The woman also posed with Reedus’ co-star, Michael Rooker, and told him that she likes to pretend they are married.

The fan later apologized on Instagram for biting the man of her dreams or nightmare by saying she lost her mind. She posted: 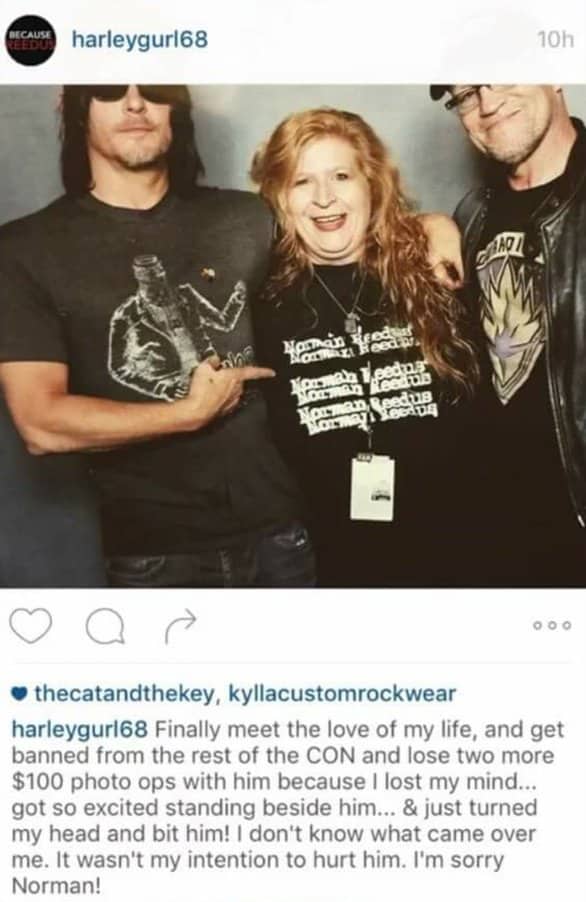 Via Instagram Reedus made light of the incident with a picture of himself wearing a shirt that read “Do Not Bite Me.”

Adele At #7 In MTV’s List Of Top Musical Artists
Gwyneth Paltrow’s Store Gets Robbed, Thief Makes Off With Nearly $173K in jewelry