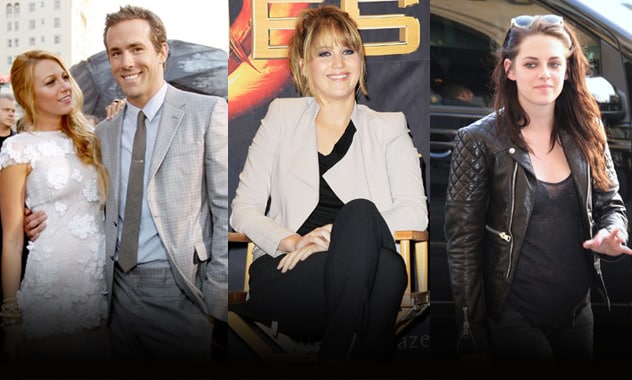 Festivals were the name of the game during the last few days, with stars like Jennifer Lawrence and Kristen Stewart popping up at the Toronto Film Festival to promote their respective films, and actors including Philip Seymour Hoffman and Joaquin Phoenix scooping up awards at the Venice Film Festival.

But, those weren’t the only recent celebrity happenings.

• They Do!: Lively and Reynolds swapped vows in a very secretive and intimate ceremony in South Carolina last night.

• Creepy Alert: A man was arrested at Miley Cyrus‘ home early Saturday home on suspicion of trespassing after he hopped her fence at about 4:10 a.m. The man claimed to be married to the former Hannah Montana star when police apprehended him.

• Back in Action: LeAnn Rimes performed her first concert since entering treatment for anxiety and stress. The singer told fans she will head back to treatment after her other concerts this weekend.

• New York Fashion Week: Rupert Sanders‘ jilted wife, Liberty Ross, stunned on the catwalk at the Alexander Wang show in Manhattan Saturday, just weeks after her Snow White and the Huntsman director hubby admitted to having an affair with Kristen Stewart. Jennifer Aniston‘s fiancé Justin Theroux was also in attendance at the show, marking his first public outing since the couple announced their engagement last month.

• Breaking Feud Rumors: Speaking of Stewart, the trailer for Twilight: Breaking Dawn Part Two was released this weekend, giving a glimpse into Bella’s life as a vampire and new mom. The embattled actress was also on hand at the Toronto Film Festival and was “excited” when she met Jennifer Lawrence (there were false rumors that the duo feuded in the past). And don’t worry about the promos for the anticipated flick, it won’t be awkward.

• Girlfriend Duties: Selena Gomez brought Justin Bieber‘s little sister and brother to the Toronto International Film Festival premiere of her animated film Hotel Transylvania this weekend. Her man was also there in support.

• Not the Master: The jury for the 69th Venice Film Festival yanked the top prize from Harvey Weinstein‘s flick The Master, after the film was awarded both the Silver Lion for its director Paul Thomas Anderson and Best Actor for Philip Seymour Hoffman and Joaquin Phoenix. No film can win more than two awards at the festival, according to its rules.

• Chopped Locks: Lena Dunham showed off her new, shorter hairstyle on Twitter Saturday after she wrapped season two of Girls.

• Possessing the Box Office: The Possession topped this weekend’s box office at $9.5 million, followed by Lawless at $6 million and The Words at $5 million.

• Tatted: Rihanna showed off her latest ink on Twitter, which was a large piece under her breasts.

• Paralympics Closing Ceremony: The Games are officially over, and Coldplay along with Ri-Ri and Jay-Z helped with the sendoff.

• RIP, Michael Clarke Duncan: A public memorial for the late actor was held Sunday at Forest Lawn in the Hollywood Hills.

Prince Harry Targeted for Assassination by Taliban
FBI to roll out $1 billion public facial recognition system in 2014, will be on to your evildoing everywhere