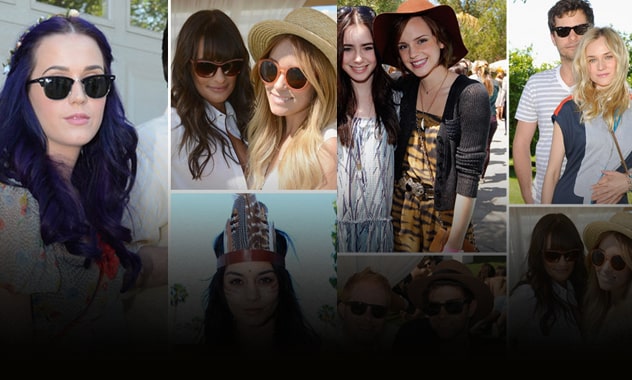 Celebs flocked to Coachella this weekend for a few days of uninhibited  partying at the annual music festival in the California desert. But, in case you  missed Katy  Perry‘s new purple ‘do, or Lea Michele gushing over Cory  Monteith via Twitter from the event, no need to worry.

We’ve got all the details on that, plus The Hunger Games‘ latest box  office record, and more, right here!

• Box Office Bite: The Hunger Games took home  the top spot in this weekend’s box office for the fourth straight week, raking in $21.5  million, followed by The Three Stooges with $17.1 million and The  Cabin in the Woods at $14.9 million.

• Partying at Coachella!: A  purple-haired Katy Perry, Gerald Butler, Paris  Hilton and many more celebs partied the weekend away, hitting gifting lounges, concerts  and after-parties at the music fest. Glee‘s on-and-off screen loves Lea Michele and Cory Monteith also made their Coachella rounds, hanging out together at the Lacoste L!ve  pool party.

• McCartney’s Valentine: Natalie  Portman and Johnny  Depp teamed up with Paul  McCartney, “singing” the lyrics to “My Valentine” in sign  language for the ballad’s music video.

• Wedding Blessing: Even though Brad  Pitt and Angelina Jolie said they wouldn’t wed until  everyone in America had the right to marry, LGBT advocacy organization Equality  California gave the newly engaged couple their blessing to tie the knot.

• TV Land Awards: Beloved casts from the likes of In Living Color, Laverne & Shirley, and Murphy  Brown were on hand for the 10th annual TV Land Awards Saturday in New York City, with In Living  Color taking home the show’s Groundbreaking Award, among other big  winners.

• Robsten Reunites: Robert  Pattinson and Kristen  Stewart will soon head back to Vancouver to reshoot a few technical shots for Breaking Dawn Part 2, which is set to be released Nov. 16.

• Big Crash: Eddie Cibrian and Brody Jenner crashed their racecars into each other at the Toyota  Pro/Celebrity Race Saturday in Long Beach. While the pair left the accident  unscathed, it cost them both the race, with The Man  Show‘s Adam Carolla taking home first place.

• Sad News: Bee Gees singer Robin Gibb  fell into a coma after contracting pneumonia. The “Stayin’ Alive”  singer, who has battled colon and liver cancer, was reportedly surrounded by  family at his bedside in a London hospital.

• Back Together, Coachella Style:Chord  Overstreet and Emma  Roberts packed on the PDA at the Coachella Music Festival this  weekend. The newly reunited couple got back together after splitting briefly in  January and made no secret of their affection for each other.

• Tatted Up: Kelsey Grammer got a new tattoo on his hip in honor of his fourth wife, Kayte Walsh. The TV star inked his wife’s name on his  waistline.

• Rebound  Romance?: Seal shared a sweet smooch on the cheek with Nick Jonas‘ ex, Delta  Goodrem at the 2012 Logie awards in Melbourne. The singer filed for  divorce from Heidi  Klum just last week.

•Brave Face: Jennifer  Hudson was spotted out smiling in Los Angeles while filming a Weight  Watcher’s commercial in the wake of her family’s murder trial. The jury has  officially been selected for the Chicago trial and testimonies will begin next  week.

‘The Flintstones’ Reboot On Hold; Seth MacFarlane Too Busy
‘The Office’ Reboot In The Works? Season 9 Could Be A Lot Different