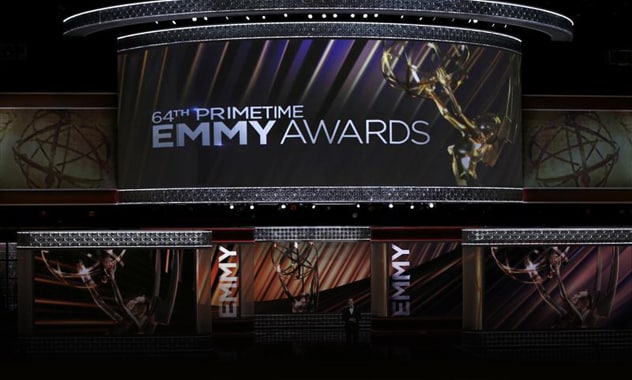 And that wasn’t all that was going on in Hollywood…

• Emmy Everything: Check out scoop on everything you want to know: The full show recap, the best and worst moments, the Fashion Police take, the funniest red carpet quotes, the complete winners’ list and much more. Plus, we got Tina Fey talkin’ about Ryan Lochte on 30 Rock, Jimmy Fallon busting on Amanda Bynes, Claire Danes all pregnant and excited, Max Greenfield contemplating Fifty Shades of Grey and True Blood‘s Denis O’Hare telling us he’s planning to adopt!

• More Emmy News: Is Jon Hamm cursed? Is there bad blood between Modern Family costars? Why does Louis C.K. thinks he’s a huge Emmy winner? Check out what you didn’t see on TV!

• Box Office: End of Watch and House at the End of the Street tied for the top spot in this weekend’s box office, with both flicks raking in $13 million. Clint Eastwood‘s Trouble With the Curve came in third with $12.7 million.

• Quick Recovery: Sharon Stone was back in action shortly after she suffered a migraine and was hospitalized in Milan Saturday. The Basic Instinct star was on hand later that day to raise money for charity at the amfAR Foundation for AIDS research.

• Back On: After reportedly calling it quits in March, Zoe Saldana and Bradley Cooper were spotted looking cozy leaving the Arclight Movie Theater in Los Angeles Saturday.

• Saturday Night Magic: Joseph Gordon-Levitt gave a Magic Mike-esque performance during his hosting stint on Saturday Night Live, ripping off his blazer and doing a pelvis-thrusting routine with a few SNL cast members.

• Court Battles: Nicolas Cage‘s former security guard, Richard Brun, sued the actor for $115,000, alleging that Cage fired him for no valid reason last year and then refused to pay him. The National Treasure star’s rep told E! News that Brun’s claim was “completely absurd and without any merit.”

• Rocking Out: Multifaceted actor James Franco released his first single and music video for “Love in the Old Days,” a collaboration with Tim O’ Keefe about romance in the 1960s.

• Opening Up: Fiona Apple dished on her recent arrest for possession of marijuana and hashish, as well as her stint in jail last week, in a rambling speech during her first post-bust concert in Houston Friday.

• Birthday Love: Bruce Springsteen got some help on stage during his concert Saturday night (which was also his 63rd birthday) from his mother.