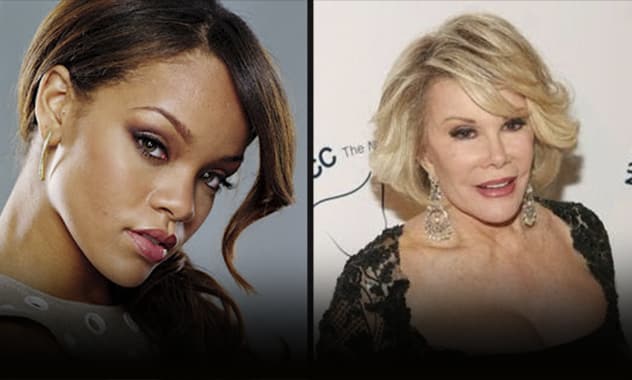 The stork definitely was in and around Hollywood this weekend, with celebs like Snooki and Anna Faris both welcoming their first children.

But baby news wasn’t all that was brewing in the celebrity realm.

• Resting in Peace: Celebrities like Ryan Seacrest and Ashley Judd hit Twitter to react to Neil Armstrong‘s death Saturday, after the famed astronaut passed away at the age of 82.

• Twitter Beef: Rihanna and Joan Rivers went head to head on Twitter Friday, after the Fashion Police host called the singer an “idiot” for saying she still loved Chris Brown during an interview with Oprah. Didn’t affect Ri-Ri too much, though. She was seen partying with Rob Kardashian over the weekend.

• Blonde Ambition: Kim Kardashian switched up her look over the weekend, changing up her dark locks to a blond ‘do. Speaking of hair transformations, did you see what John Mayer did?

• Death Hoax: Russell Brand hit Twitter Saturday after he became the latest victim of a death hoax, tweeting, “Bloody hell. I better cancel the milk,” along with a link to the fake death post.

• Apologies: Ryan Lochte‘s sister, Megan Jean Lochte Torrini, issued an apology after a video hit the web of her using racial slurs in 2008.

• Banned: Ellen Barkin sounded off on Twitter Friday after a Utah TV station banned her show The New Normal.

• Box Office: The Expendables 2 took home the top spot in this weekend’s box office with $13.5 million, followed by The Bourne Legacy with $9.3 million and ParaNorman at $8.5 million.

• Moolah Central: The band Journey was paid a huge amount of money to play a gig during Mitt Romney‘s event.

• Picture Perfect: Matthew McConaughey reminded everyone how beautiful his family is.

• Friend Zone: Pippa Middleton was seen hanging out with an old, um, friend?