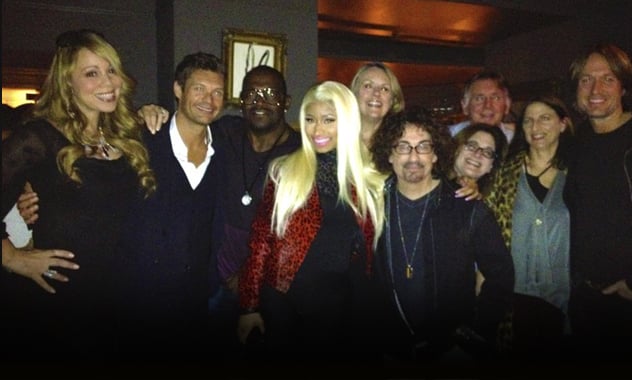 And while we can’t wait to see how that combo turns out when the show debuts next year, there were even more exciting happenings in and around Tinseltown this weekend.

We’ve got all the details on Saturday Night Live‘s season premiere, Prince William and Kate Middleton‘s Diamond Jubilee travels, which stars won big at the Creative Emmy Awards and much more, right here!

• Staying Strong: In the midst of Kate Middleton’s topless photo scandal, the Duchess of Cambridge and Prince William soldiered on through their royal tour of Southeast Asia, stopping in Malaysia, the rainforests of Borneo and the Solomon Islands.

• Idol News: Fox announced that Nicki Minaj and Keith Urban will officially be sitting at the American Idol judges’ table with Mariah Carey and Randy Jackson. Take a look at them in their official seats!

• Late-Night Laughter: Seth MacFarlane kicked off the season premiere of Saturday Night Live, taking on Olympic swimmer Ryan Lochte and other characters while he was at it. Meanwhile, Frank Ocean was on hand to perform and Clint Eastwood took his “Invisible Obama” show on the road.

• Twitter Drama: Kate Gosselin got into hot water with some of her followers after she tweeted a photo of daughter Mady trying on her peep-toe pumps. Lindsay Lohan gave her two cents on Amanda Bynes‘ latest situation.

• Slaying the Box Office: Resident Evil: Retribution topped this weekend’s box office at $21.1 million, followed by Finding Nemo at $17.5 million and The Possession at $5.8 million.

• Snuggling Snooki: Just weeks after giving birth, Snooki shared a super cute photo of herself looking at baby Lorenzo Saturday, with the caption “I Love You.”

• Sending a Message: Emma Stone and Andrew Garfield outsmarted the paparazzi Saturday when they left an NYC restaurant holding pieces of cardboard in front of their faces with hand-written notes promoting two of their favorite charities.

• Gettin’ Bumpy: Reese Witherspoon showed off her bump while going to dinner with the family in Venice, Calif.

• Keeping Up News: Did you guys hear?! There’s going to be a new season of Kim & Kourtney Take Miami! Maybe Mercy will make an appearance.

• Ball Game Blowout: Dodgers fan Eric Stonestreet got himself in a little trouble at Saturday’s game.

• ALMA Awards: Wondering if you should watch? Here are our reasons why you should.