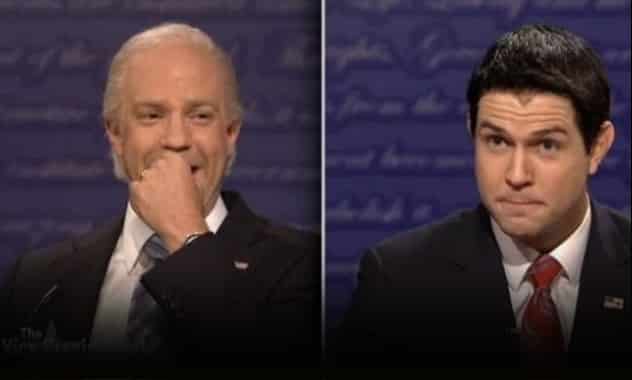 Saturday Night Live was on fire this week with a hilarious vice-presidential debate skit, and Christina Applegate was back to host the show after a 20-year hiatus!

But that wasn’t the only thing going down in entertainment news this weekend.

• Too Many Stars: Katy Perry, Carly Rae Jepsen, Tina Fey and many more celebs were on hand for Comedy Central’s Night of Too Many Stars benefit in New York City Saturday Night that raised funds for a variety of autism-education and family-service programs across the country.

• Surprise Appearance: Moviegoers at a West Hollywood theater Friday night were surprised when Brad Pitt showed up to talk about the war on drugs during a screening of the documentary The House I Live In.

• No Visitors: Police arrested a man who was found at Frances Bean Cobain‘s Los Angeles home.

• Rave Reviews: Skyfall won’t hit theaters in the U.S. until Nov. 9, but its already nabbing high praise from film critics, who released early reviews of the action flick this weekend.

• Apprentice Return: First-season Apprentice champ Bill Rancic announced his return to the show as a mentor on the inaugural season of All-Star Celebrity Apprentice.

• Have Mercy! Kim Kardashian showed off a sexy-cat costume on Twitter while she was out costume-shopping for Halloween this weekend.

• Sad News: Television host and radio personality Gary Collins died of natural causes Saturday morning, while Russell Crowe and his wife are calling it quits after nine years of marriage.

• Puppet Pandemonium: Fans riled up by Mitt Romney‘s pledge to cut the federal government’s subsidy to PBS are planning to stage a “Million Muppet March” in Washington, D.C., in November.

• Taking the Box Office: Taken 2 topped this weekend’s box office for the second straight week with $22.5 million, followed by Argo at $20.1 million and Sinister at $18.3 million.

• Baby-Bumpin’ Onstage: Singer Shakira took her bun in the oven to Azerbaijan to perform at the closing ceremony of FIFA U-17 Women’s World Cup of soccer.

• Romantic Night Out: Soon-to-be newlyweds Jennifer Aniston and Justin Theroux enjoyed a romantic dinner over the weekend at the Chateau Marmont.