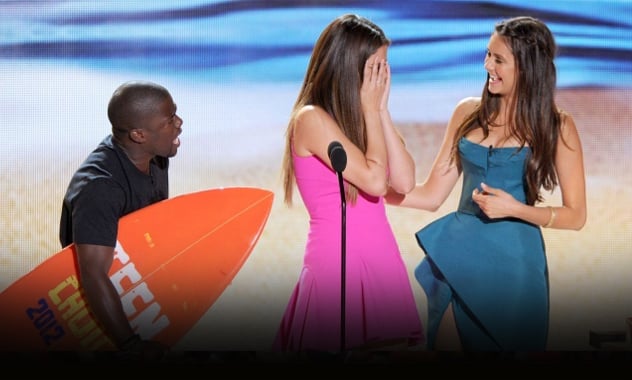 It was a sad weekend in Hollywood and beyond as new details poured in regarding the tragic shooting at an Aurora, Colo., movie theater that left 12 dead and 58 injured.

But, there was also a bit of lighthearted news as well, including the Teen Choice Awards and American Idol winner Lee DeWyze‘s wedding.

Take a look at the latest celebrity happenings and more details about alleged gunman James Holmes‘ apartment and the victims in the Dark Knight Rises tragedy.

• Dark Knight Rises Tragedy: James Holmes’ booby-trapped (and Batman decorated) apartment was officially cleared Saturday after a bomb squad worked throughout the day, defusing incendiary and explosive devices that Holmes allegedly placed throughout his 850-square-foot residence. The names of the twelve people killed in the tragic shooting at the Colorado movie theater on Friday were also revealed over the weekend. Plus, hear what Anne Hathaway and Christian Bale had to say.

• Resting in Peace: Sage Stallone was laid to rest Saturday morning at St. Martin of Tours Catholic Church in the Brentwood area of Los Angeles; the son of Sylvester Stallone and Sasha Czack was found dead in his L.A. apartment July 13.

• Teen Choice Awards: Did you miss the show? Don’t worry, we have the best and worst highlights for you to enjoy!

• Money Maker: Octomom Nadya Suleman told E! News she was finally financially stable and off welfare, following her stint stripping at a gentleman’s club in Florida to promote her adult film.

• Missing: Katherine Jackson, Michael Jackson‘s mother was reported missing by her nephew, Trent, late Saturday night. While her son Jermaine Jackson tweeted Friday that his mother was “fine and resting up” in Arizona, other family members, like her granddaughter Paris Jackson, were still concerned about Katherine’s whereabouts. Luckily, police were able to locate Katherine and confirm that she is safe with family.

• Kimye Hit Miami: Kim Kardashian and Kanye West were spotted canoodling in Miami at the Midori Beachside Bash Kim hosted Friday evening. And Kendall and Kylie Jenner have nothing but nice things to say about this new couple.

• Back to the Beach: Tara Reid said she’s “all good and healthy” after getting seafood poisoning and hurting her back on a Jet Ski in France.

• Bachelorette Finale: Who did Emily Maynard choose?! Was it who we thought it would be?