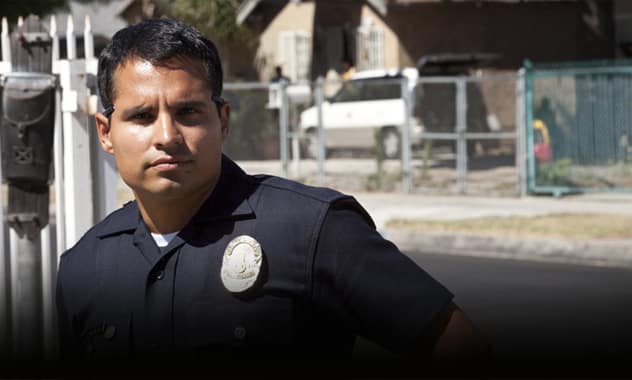 End of Watch”, the stirring buddy cop film starring Michael Peña and Jake Gyllenhaal as L.A. police officers Mike Zavala and Brian Taylor, enters its second week of release today atop the box office and with tremendous momentum.  Latino moviegoers accounted for more than 30 percent of the film’s haul last week and the film is winning rave reviews from both critics and Latinos alike for its double claim to fame: a great film that also happens to portray Latinos positively and accurately.

In the weeks and months ahead “End of Watch” is sure to be dissected and discussed as a possible Oscar contender but in the meantime we went behind the scenes to explore how this film got so much right from the bottom up.  Some of the answers will surprise you.

The first element the film got right is that it is a powerful story about friendship, family and sacrifice.   Universal themes with universal characters never hurts.

“Michael Peña plays a great character that Latinos can be proud of but none of that really matters if you don’t begin with a great story that’s also well produced,” said Ivette Rodriguez, CEO of American Entertainment Marketing (AEM) and the lead publicist for Hispanic outreach.  Writer/director David Ayer, who has some practice making films about cops (he wrote the highly acclaimed “Training Day”), has crafted an engaging story that is humorous, sentimental and dangerous all at once.

“The camera angles make the audience feel like they are riding along with the characters and in other instances you end up fearing for the lives of these characters,” said Rodriguez.  In a recent summer screening audience members found themselves ducking from the shotgun blasts.  Exit polls from last week’s first week of release show that audiences gave the film an A- rating, a sign that the film will continue to gain at the box office.

From a Latino point of view, “End of Watch” is also groundbreaking as it portrays the Latino experience – FINALLY – with balance depth.   Many Latinos will relate to and embrace Pena’s character.

“Officer Zavala is thoughtful, smart, he loves his family and he’s a great friend,” said David Cassidy, President of Marketing at Open Road Films who distributed the movie.  ”The one thing that surprises a lot of people is that Michael’s character is authentically Latino.  He’s not perfect.  He’s not drawn to be politically correct.  He’s just authentic.”

Gyllenhaal’s character has his own, unexpected nuances that are pro-Latino.  ”Jake’s character is genuinely fascinated by Michael’s Latino values and how he loves and cares for his wife and children,” said Rodriguez.

“David was able to capture our culture so well because he grew up among Latinos in South Central L.A. and he’s even married to a Latina with whom he has several children,” said Rodriguez.  ”This is an experience David knows well.  He loves the culture and he even speaks Spanish fluently.”

The world is littered with wonderful films that never get seen so that’s where marketing plays a big role.  Open Road Films would not disclose the exact figure that is being spent to market the film but said it was over a million dollars with a strong focus on good old fashioned, grassroots marketing, PR and social media.  For months producers have focused on intense outreach to the two core audiences that most love and relate to the film: Latinos and police officers.

More than three months before the film premiered, the actors and Ayers took “End of Watch” on the road for private Q&A screenings with Latino influencers and police associations, both of which instantly related and embraced the film as their own.

This is the promotional flyer that was distributed to key stakeholders in the Latino and police association communities.

AEM conducted extensive Hispanic radio outreach and Peña did many interviewers with print and TV media in the Top 25 Hispanic markets.  Mailings were sent to disc jockeys across the country requesting they talk up the movie for opening day – with similar verbage from a flyer that was mailed to influencers nationwide.  Producers also wrote and distributed a “canned feature” which is essentially a story written by a film journalist about the move for media that are not able to attend press screenings or interviews.  This enabled many print and online media to cut and paste the story with clips.

The online strategy focused on releasing and promoting trailers, clips and photo galleries about the film.

So what’ the greatest lesson Hollywood ought to learn from this film?  ”That there is a need and interest in great Latino stories that portray an every day Latino living his life as a man, father and friend,” said Rodriguez.   “End Of Watch highlights Latino culture and values in a way we never see and without ever being condescending.”

Will “End of Watch” finally show that Latinos are able to be more than onscreen household servants, lascivious Latinas and gangsters?  Time will tell but Hollywood now has now has no excuse.  ”End of Watch” is the template on how to do it right.