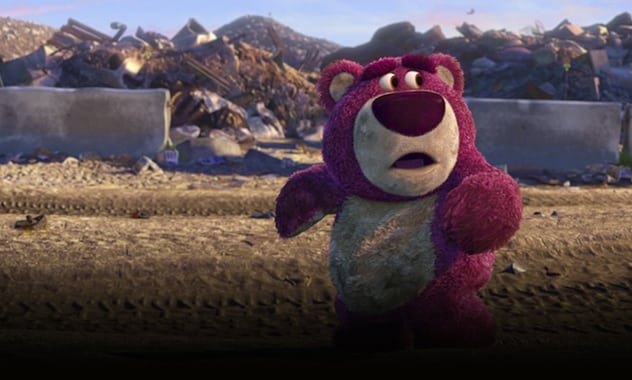 Disney studios are dealing with lots-o’-lawyers after being served with a law suit claiming copyright infringement. Toymakers DLI allege that Pixar’s Toy Story 3 character Lots-O’-Huggin’ Bear stole it’s name and hugging habits from their own “Lots of Hugs” bear.

Lots of Hugs, an embrace-happy teddy on the market since 1995, is manufactured in New Jersey and was chosen by Beijing to be the country’s official Olympic bear in 2008 (it did, of course, undergo a black and white makeover to become a panda for the occasion). Hugs’ patented “hugging technology” was also used by a plush toy product modelled after the bear from Bear in the Big Blue House, a kid’s program broadcast by Disney Junior.

I know. That’s a lot of bears, but the point (or at least the point the law suit hopes to make) is that Disney was probably aware of DLI’s Lots of Hugs when Pixar came up with the bear’s hugging doppelgänger, Lots-O’-Huggin’ – a meaner, more antagonistic teddy bear than the original. The assumption being that since Disney had already licensed the hugging technology in the past, they’d have to know the bear existed, and was copyrighted.

Instead of just hugging it out, DLI are suing Disney, inspired perhaps, by the fact that Toy Story 3 took in $1 billion in box office returns. They want to be compensated for the alleged infringement and they’d like Disney to agree to refrain from using the bear in any future projects – though considering Lotso’s fate at the end of the last Toy Story movie, he’s pretty unlikely to appear again.

Taylor Swift Gets Her Hair Chopped and Shares The Experience Amid Supporters On Instagram
Key & Peele: What About “Non-Stop,” Though?