It is not the sort of fashion craze that is likely to catch on.

But Will Forte was once again sticking to his guns after he wore his half-shaved hair and beard despite being a nominee at the Critics’ Choice Awards in Los Angeles on Sunday.

The look created plenty of buzz, with Jennifer Aniston and Justin Theroux making time to take a selfie with him during the ceremony.

The Last Man On Earth star had debuted his new look at the TCA All-Star Party on Friday, as he partied with cast mates in Pasadena.

Self-styled comedian Will, who lost out on a best actor in a comedy series gong, acted like he had no idea what the fuss was about as he posed at a table inside as the show prepared to get underway.

He did not adopt the bisected hair and beard look when it came to his clothes though, as he looked dapper in a suit and bow tie.

And his look soon attracted a host of stars desperate to get a picture with him, including Justin, Jennifer, Bryan Cranston and Judd Apatow.

Justin Theroux joked the look reflected the star’s split personality, captioning an Instagram photo: ‘Always awkward bumping into Will Forte… Half the time he’s so sweet. The other half he acts like a total psycho.’

Always awkward bumping into Will Forte… Half the time he’s so sweet. The other half he acts like a total psycho.

The 45-year-old was not the only one wearing the perhaps too fashion forward for its own good look at the event however. 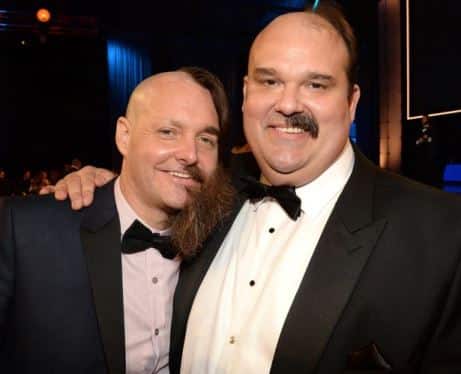 For his co-star and fellow half wit Mel Rodriguez had also shaved his moustache and barnet, though his shorter locks meant it looked a little less outlandish.

It is thought the dynamic duo may be engaging in a stunt in response to the fate of their show, perhaps in the hope the publicity will do it some good.

For while the series has garnered critical acclaim over its two seasons, audience numbers have been slipping.

As of December, Fox had yet to decide whether to renew the quirky comedy for a third season.