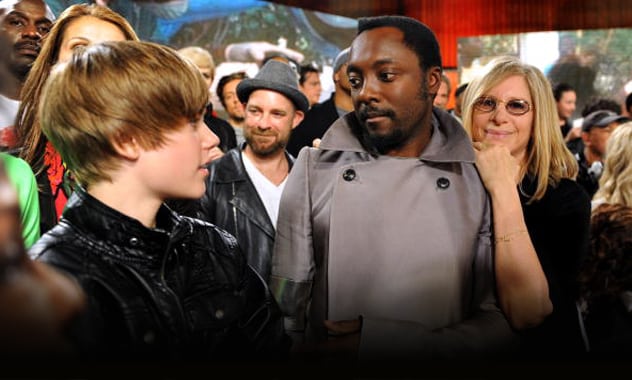 Will.i.am’s upcoming solo album, #willpower will include an A-list of guest appearances, and according to him compares to some of his best work alongside his band the Black Eyed Peas.

While discussing his latest project in an interview with billboard.com, the Black Eyed Peas front man revealed that he’s recorded somewhere between 200-300 songs, twelve of which will appear on the final record.

He’s enlisted the services of Justin Bieber, Ne-Yo, Nicole Scherzinger, party rockers LMFAO, and Eva Simons, who is featured on his latest single, ‘This Is Love.’

“Eva Simons is, hands down, the princess of dance music,” says will.i.am, who shot the video for the song in London. “She was doing it way before everyone was doing it, and she produces her own self.”

He went on to say,

“She is the real thing. It’s exactly what dance music is about. That’s why I’m so happy and honored to be working with her.”

As for what type of music we can expect on #willpower?

“There’s classical sh–, like just me and a guitar and an orchestra or me with just an orchestra and a kid’s choir,” he says. “There’s some ghetto, ugly, dirty stuff. And then there’s dance stuff, global world stuff and, like, avant garde, left-of-center, for-art’s-sake music that has nothing to do with getting played on the radio. I’m just art-ing out. It’s pretty diverse.”

Will went on to say that the album would probably not include his single ‘T.H.E. (The Hardest Ever), which features Jennifer Lopez and Mick Jagger.

“I just always want to put out songs. They don’t necessarily have to be part of an album,” he says. “Those are just songs to let people know along the way what I’m working on. That’s me having audio, musical conversation with the public.”

During the interview, Will also discussed the current state of his band the Black Eyed Peas, which are currently on hiatus. “The other want to take breaks. I don’t know how to take breaks,” he said. However, he promised that “we’re definitely going to put (another) record out, just no idea when.”

On how he plans to promote himself as a solo artist, while trying to fill the void left by his BEP band mates, Will explained,

“What I have going against me is everybody saying, ‘Where the other three people at?’ I can’t just go out with a bunch of background dancers to make up for the fact Fergie, Ap (apl.de.ap) and Taboo aren’t there.”

He continued by saying,

“I have to come up with a different idea and invent something to make people say, ‘Dang, that was better than what you were doing with the Peas!’ That won’t be easy, but if I can’t do that, I’m staying home.”