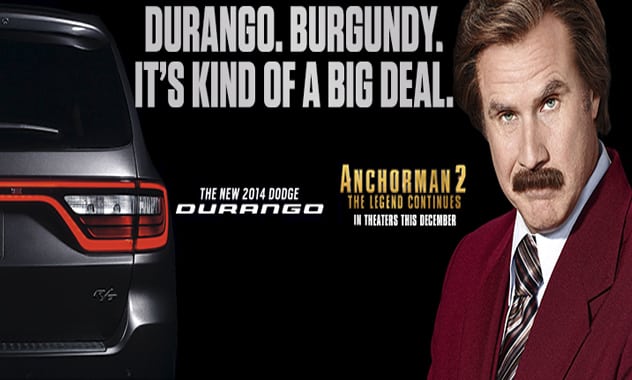 Who knew a roomy glove compartment could sell cars? Well, it probably has more to do with the car salesman, who in the case of some recent Dodge Durango commercials, is none other than Will Ferrell’s wonderfully quotable Anchorman character Ron Burgundy. EW spoke with the ad agency and the Funny or Die team about the creative process behind those silly ads (and the 70 or so additional filmed spots) last month. But aside from going viral and generating buzz for the Dec. 20 release of Anchorman 2: The Legend Continues, Ron Burgundy has also managed to actually sell a whole lot of Dodge Durangos.

Sales of the SUV for October increased by a staggering 59%, according to Chrysler Group data. (Bloomberg Businessweek and Forbes first reported the news.) The Ron Burgundy spots debuted at the beginning of last month. Overall, Chrysler group is also reporting an 11% increase compared to Oct. 2012. Could the narcissistic man with the mustache have anything to do with it? “Durango sales have been very strong this year, and the Ron Burgundy Durango ads are absolutely building on that momentum as we launch into sales of the new 2014 model,” according to the Chrysler Group,”We’ve seen almost an 80 percent increase in Web traffic alone since the campaign launched.”

So who’s actually buying those cars? “It’s mainly us,” said Jake Szymanski, director of the ads (and Funny or Die veteran), who joked that they now have garages full of SUVs. Szymanski said he was slightly surprised at the sales numbers and “how big the jump was.” But ultimately he was thrilled that the zany humor and improv style of the commercials now have the numbers to back it up: “It’s just fun to see creatively satisfying stuff that we were very happy with … also work well for the commercial.” Chris Bruss, who helms the the commercial product division of Funny or Die, wasn’t phased by the lucrative results. He was confident in FoD‘s material and in the Ron Burgundy character: “He’s somebody who, if you’re fast forwarding on your DVR, you’re probably going to stop and take a look at him no matter what.” Indeed, it’s hard not to look at Burgundy, as ahead of the December sequel release, fans have been treated to a continuous onslaught of the anchorman’s face on a special edition ice cream, a memoir, and via local news copycats. Not that we’re complaining, after all, it’s been nearly a decade since the first movie debuted.

“Ron Burgundy is obviously a big deal for America, as the Dodge Durango is for us,” Olivier Francois, CMO of the Chrysler Group, told EW in an email.The 10 million views on YouTube in 30 days is an indication that he resonates like no other personality in pop culture. Like the Dodge brand, he is confident, unapologetic, irreverent and fearless: as a result he is culturally relevant to our customer. It’s truly a match made in heaven. As proof, Durango site visits are up 89% and sales are up 60% year over year,” he added.

Check out the new commercials that debuted this week below.(You can see the first ones here, with some behind-the-scenes tidbits). 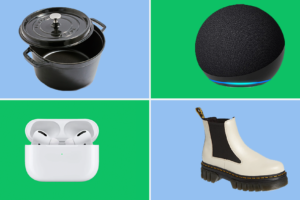 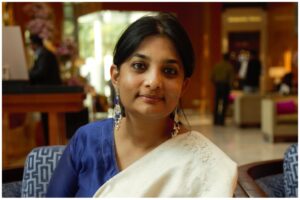 ZEE5 Global’s Archana Anand On ‘RRR’s Success, Sports Rights In India And Finding A Niche In The U.S.