UNPARALLELED RATINGS ACHIEVEMENT IS HISTORIC MILESTONE
MOST INFLUENTIAL, WITH 3 MILLION P6+ AUDIENCE IN THE COUNTRY

SPANISH BROADCASTING SYSTEM, INC. today announced that its flagship New York City station, WSKQ-FM (“Mega 97.9”) had achieved a historic milestone in claiming the #1 ranking with the release of the most recent Spring Nielsen ratings for the total week AQH, A18-34, 18-49, and 25-54 demos among ALL radio stations serving the Tri-State area, regardless of language or format. 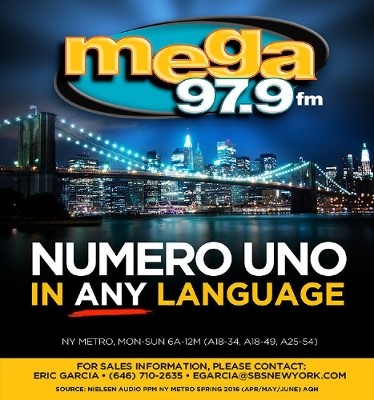 This historic achievement highlights the sustained dominance that broadcast radio continues to have in the daily lives of today’s Hispanic consumers. The result also reinforces Nielsen’s findings that terrestrial broadcast radio reaches 97% of the national Hispanic population each week. WSKQ-FM Mega 97.9FM now reaches 3 million listeners P6+ each week during June, a new 2015/2016 record for the station. The cume gains are widespread among A18-49, A25-54, A18-34 and P12+, up 25% vs. a year ago and up double digits since May 2016.

These recent ratings rank for WSKQ-FM as not only the most-listened-to station in the Metropolitan New York/New Jersey/Connecticut area, but also set MEGA 97.9 as the #1 Latino station in the nation. Mega 97.9FM’s audience in the United States, in comparison with the top ten states in America, ranked #5 ahead of 46 Hispanic populated states, a milestone achieved for the Hispanic station.

This historic achievement highlights the sustained dominance that broadcast radio continues to have in the daily lives of today’s Hispanic consumers. The result also reinforces Nielsen’s findings that terrestrial broadcast radio reaches 97% of the national Hispanic population each week.

Eric Garcia, SBS Radio Revenue Chief and General Manager of SBS-New York commented, “WSKQ-FM has served as the epicenter for Latino culture in New York City for over thirty years. These most recent Nielsen result’s, solidify our leadership position in the market place as we continue our service and responsibility, to the New York Metro Latino community, and  overall client base. MEGA 97.9FM and Amor 93.1FM today is stronger than ever, with offerings expanding from over the air radio, digital, mobile, and experiential programs. All, backed by some of the most compelling personalities in the country, and programmed with the best in music, and concert distributions. Congratulations to the entire SBS family for their incredible efforts, and making history in the Big Apple.”

Now, listeners all over the globe are also able to live stream WSKQ-FM, WPAT-FM, and all other SBS radio stations via the newly-launched LaMusica mobile app, available as a free download at the Apple app store and at Google’s Play Store. For more information about LaMusica please visit http://app.lamusica.com

SBS EVP of Programming, Jesus Salas, added, “For WSKQ-FM to garner a #1 ranking in this important demos in New York City radio outlets, regardless of language, it’s truly a remarkable precedent – it’s history in the making. The station has forged an unbreakable bond with millions of listeners in a truly unique way. Congratulations #MEGAYORK!”

SBS continues to lay claim to the national leadership position in the following format genres: #1 Tropical, #1 Hurban, as well as the overall most-listened-to Spanish station in the nation with Mega 97.9FM #LaMegaSePega.