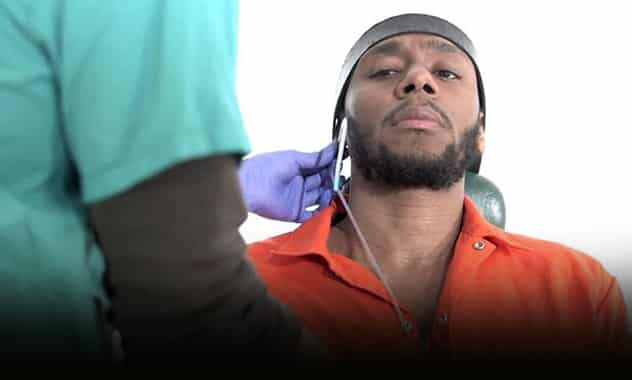 In a video that many may find difficult to watch, actor and rapper Yasiin Bey (formerly known as Mos Def) attempts to undergo a force-feeding procedure that has been used on hunger strike participants at the Guantanamo Bay prison. The demonstration, which Bey abruptly stops due to apparent discomfort, is part of a campaign protesting the force-feedings.

Bey, 39, agreed to the procedure as part of the Stand for Justice campaign, timed to coincide with the beginning of the holy fasting month of Ramadan, which begins Monday. The footage was released to The Guardian by British human rights group Reprieve.

At more than 4 minutes long, the clip shows the “Italian Job” star — dressed in a bright orange jumpsuit — being restrained in a chair as anonymous medical personnel in scrubs attempt to force a plastic tube into his nostril. Bey is brought to tears during the procedure, eventually crying out for them to stop. Afterward, he tells the camera the ordeal was unbearably painful and made him feel like parts of his nose and throat were burning.

“I really didn’t know what to expect,” Bey says. “I really couldn’t take it.”

The demonstration is reminiscent of similarly hard-to-watch footage of journalist Christopher Hitchens submitting to waterboarding for a 2008 Vanity Fair feature.

While Bey was able to stand only a few minutes of the force-feeding procedure, Guantanamo prisoners go through the experience twice a day, sometimes for as long as two hours per feeding.

According to United States Southern Command documents published online by Al Jazeera, “Standard Operating Procedure” for these feedings includes shackling prisoners into a restraint chair while lubricated tubes convey a liquid nutritional supplement into their stomachs. After the feeding, prisoners are kept in a “dry cell” for 45 minutes to an hour in order to make sure they don’t try to vomit the formula.

Currently, 106 of Guantanamo’s 166 prisoners are on hunger strike. Around 45 of the strikers are subjected to force-feeding in a similar fashion to Bey, according to The Guardian.

While lawyers for four of the detainees on hunger strike had sought to halt the feedings during Ramadan, their petition was denied by U.S. Justice Department officials last week, according to CNN. Pentagon spokesman Lt. Col Todd Breasseale told CNN that military officials will force-feed prisoners at night in an attempt to accommodate Ramadan’s daylight-hours fasting requirements, but added that the change “is an accommodation, not a right.”

Reporting on Bey’s previous political activism, The Washington Post notes that the artist has been a fierce critic of the U.S. government for its response to Hurricane Katrina.