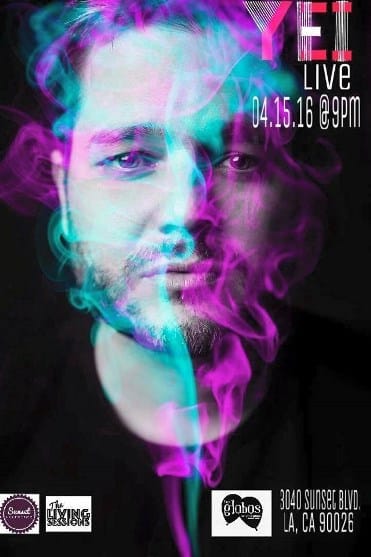 Fans of rock that relish in independent, revolutionary, intelligent, and powerful sounds will find that #YEI is the perfect artist, one that combines and captures all these tumultuous times without the fear of defying the establishment, governments and their main characters alike.  #YEI is a singer-songwriter, multi-instrumentalist and a devoted student of the musical genres that have built his sound, lyrics and style. By immersing himself in the opulent musical scenes of Venezuela, the U.S. and Barcelona, all places where he has lived, #YEI has been able to create a unique sound and a very compelling musical proposition.  His music is intelligent, defined by word play and edgy lyrics that fall between wrong and right.

#YEI has taken the necessary time to officially release his solo project, a complete and elaborate piece of work marked by an innovative sound.  The album was finished in Barcelona, the city where he rerouted his destiny when he started recording his own music.  Controversy, guitars, lyrics that speak on human sensibilities, irony, intelligent and dark humor inspired by artists who not only express themselves through their music, but also through their lyrics, art, and photography while taking their audiences on a creative, seductive, and gratifying artistic journey.

#YEI’s project came to life about four years ago, with the goal of writing songs without any restrictions and lyrics with no filters.  The creative process was fueled due to some of his music, lyrics, and ideas being censored.  This in turn became his motivation to create music, which is very evident in the new album.

And so he transformed all of his sadness, pain, and frustration into creative weapons which he used to write, compose, create melodies and record an amusing, eclectic, critical, and rich album with different perspectives and sounds entertaining anyone who listens to it from beginning to end.  His album is an exquisite collection of songs that he picked up from different corners of Venezuela, on the road and in studios in New York and Miami that were finally gelled together in Barcelona.

It was there that #YEI met his creative accomplice who helped him sort through a collection of over 100 songs he had written in the course of two years.  Leo Aldrey became the album’s producer, a young composer and arranger with a lot of experience in the U.S. with the Red Bull Music Academy, as well as producing various local artists and soundtracks such as his project Noko Woi.  Niko Woi’s songs were precisely the bridge that connected them both.  Aldrey’s legacy, more so than the 11 songs on the album, is a new vision for music, one that not only requires talent but discipline as well.  It’s an album he started from scratch, from the first chord…an intense yet a fun recording process resulting in a comprehensive piece of work providing this young singer-songwriter with an incredible learning experience.

With this collection of songs, #YEI went into the studio with Leo in order to finish creating the concept of the album.  Honest, fun, and crude lyrics accompanied by sounds created in the middle of one of the most multicultural cities in the world.  A fusion of Rock with elements of Jazz, African beats and an amazing mix of vintage and modern sounds with guitars seduced by Samba and Rock fused with unmerciful Rock drums and percussions.  All this mixed with rhythms from Latin America, the Caribbean, Africa and Barcelona, made this the perfect stage and place to merge these amazing sounds.

#YEI deliberately thought about making an album that would be perfect for acoustic shows or shows with his band.  Each song has been built so that he can perform them just with a guitar or a full band (guitar, bass, drums and keyboard).  This flexibility permits the record to capture fans, skeptics, and any bystanders in #YEI’s path.  Thus, #YEI appears on the scene with creative and personal maturity for the launch of his new project, after being one of the members of the group Telegrama, a band who helped shape the alternative rock scene in Caracas, Venezuela nearly a decade ago.  Caracas is also known for giving birth to bands such as ViniloVersus and La Vida Bohème, among others.

At the end of 2015, #YEI gave his fans a sneak peak of his debut album “Barriendo Escombros Después De La Fiesta” (Sweeping Debris after the Party) by releasing the song “Alma Pesa” (Heavy Soul) featuring Eric Colón Moleiro.  The song and video are a razor sharp critique about the turbulent and intense social, political, and cultural moments that have occurred within Venezuela, his native country.

The first official single is “Folky”, is a song that embodies alternative music, modern with a European sound.  The single plays with ideas, it criticizes people in show business and politics that navigate between power and failure while inviting fans to think while they dance and enjoy the superb layers of guitars recorded on the track.  “Folky” was written by #YEI and Armando Añez and produced by Leonardo Aldrey in Audiobend Studios in Barcelona, Spain with the participation of Rafa Giner, Daniel Pirone and Juan Daniel Gonzales.

#YEI’s new album is an incredible collection of songs.  Each song is a new discovery to be enjoyed and analyzed.  And so we welcome you all to #YEI’s sonic universe…enjoy the ride!