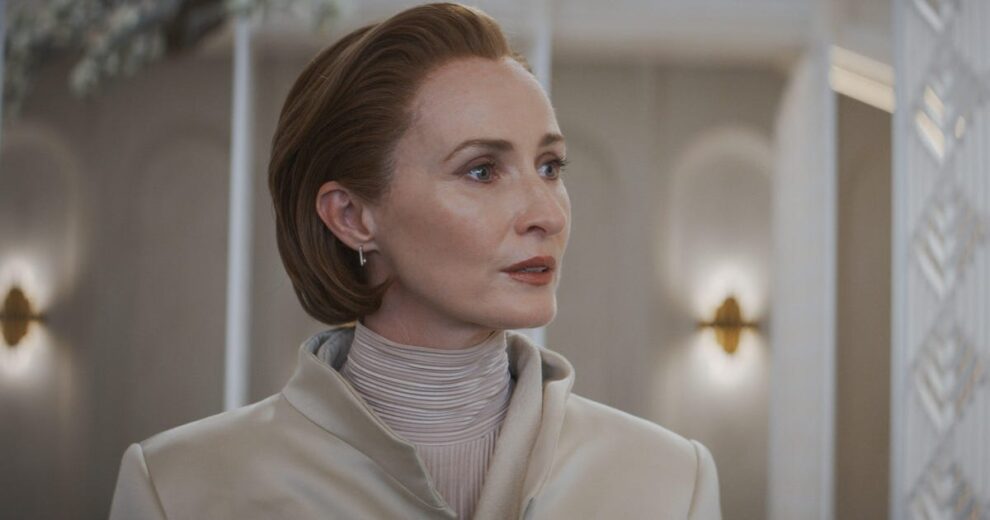 The excellent Star Wars series Andor came to episode 11 on Disney Plus on Wednesday, returning to mercenary Cassian Andor (Diego Luna) after rallying inmates to make an awesome escape from the Empire’s horrible prison. He’s gone on the run with his future Rebel Alliance buddy Ruescott Melshi (Duncan Pow).

Sen. Mon Mothma (Genevieve O’Reilly) is trying to hide her rebel fundraising from the Empire, forcing her to work with greasy oligarchical financier Davo Sculdun (Richard Dillane). He isn’t interested in being paid to help Mon launder her money but wants his son to be introduced to her daughter in the hope of sealing a Game of Thrones-style marriage pact. Ew.

Andor takes place five years before Rogue One, which tells the story leading directly into original Star Wars movie A New Hope. Let’s escape the Empire with some SPOILERS.

Crawling through the dirt

NARKINA 5 – We catch up with Cassian and Melchi as they cling to the side of a cliff to evade an Imperial search. They’re filthy and their lower extremities are in bad shape from being in the run barefoot.

It briefly looks like the boys are screwed when some Narkinians catch them in horribly restrictive-looking nets as they make a break to steal their ship. It’s our first time seeing this planet’s native species; they’re cool-looking and speak a bit like pirates.

The Narkinians initially suggest they’ll turn them in for the Empire’s bounty, but mention that the prison has spoiled the planet’s water and decide to defy the regime. Much to Cassian’s surprise, they agree to take them to Niamos (AKA space Ibiza, where his money is hidden).

FERRIX – Unbeknownst to Cassian, his adoptive mom Maarva dies of her unnamed ailment. The planet’s cold had already affected her health, but she exacerbated it through her futile rebellious acts against the occupying Imperials.

Heartbreakingly, charming droid B2EMO (AKA Bee) is devastated by this and doesn’t want to leave the house. Family friend Brasso (Joplin Sibtain) is super compassionate toward the droid, even agreeing to stay the night with him in Maarva’s house.

Oh Bee, I heart you.

We also learn about “bricking,” a local custom, where a person’s ashes are mixed with mortar and local stone dust to create a brick. It’s then inserted into a wall, letting their remains become a part of the planet’s structure.

The Imperials have placed restrictions on funerals, because they’re jerks. Dedra orders her minions to let Maarva’s funeral happen, in case Cassian shows up. It’s narratively convenient that he happens to be out of prison for this… let’s just say it’s the Force at work.

Vel was previously tasked with killing Cassian, since he could identify Luthen to the Imperials. She sees an opportunity to find him at last, but it’s unclear if she’ll be willing to take him out — he proved himself as a pretty honorable ally during the Aldhani heist.

She also visits her cousin Mon Mothma, only to find Mon’s 13-year-old daughter Leida Mothma (Bronte Carmichael) has dived deep into the religious teachings of their homeworld Chandrila. She’s apparently preparing for marriage, since their customs encourage tying the knot as teenagers.

However, the dirty looks Leida keeps throwing at her mom suggest she’s also doing it as an act of defiance. That defiance will almost certainly extend to her agreeing to marry sleazebag Davo Skuldun’s son, unfortunately for Mon.

Adding to the rebel politician’s stress (or perhaps sharing the burden), Mon reveals the full extent of her money problems to Vel. She had no problems channeling money from her family accounts to Luthen at first, but an Imperial audit made things challenging and the Aldhani heist made it impossible. She’s kinda stuck dealing with Davo.

Pity Vel couldn’t sort Mon out with some of the money from the heist.

Elsewhere on the city planet, former Corpo sergeant/big Star Wars potty mouth Linus Mosk (Alex Ferns) contacts his disgraced ex-officer Syril and tells him about the possibility of Cassian showing up for Maarva’s funeral. Syril steals credits from his mom’s safe, presumably to fund his trip to Ferrix.

SEGRA MILO – At his secret base, rebel extremist Saw Gerrera (Forest Whitaker) learns that Luthen is going to let their unseen ally Anton Kreegyr walk into an ISB trap to protect his mole. It rackets up the tension between Luthen and Saw and briefly seems like it’ll lead to them killing each other.

Luhten ultimately wins the paranoid Saw over through his seemingly endless powers of charisma and persuasiveness.

The rebel pair seem to reach a new level of trust here, with Whitaker and Skarsgård being an absolute treat to watch again.

In space, Luthen’s ship is nearly captured by an Imperial Arrestor Cruiser, whose tractor beam comes out of a conspicuous dish on the front. Feels like a big vulnerability.

The wily rebel takes full advantage with his awesome countermeasures, wrecking the dish and battling a bunch of TIE fighters sent to pursue him. In a little coup de grace, he unleashes a pair of supercool laser beams from either side of the ship and spins to take down the last two TIEs.

He blasts off to hyperspace, seemingly planning on going to Ferrix to find Cassian. It’s unclear if Luthen intends to rescue him or kill him, but I like the idea of them all teaming up and becoming rebel BFFs. Probably too much to hope for this in this show though.

Bad news at the beach

NIAMOS – A sneaky Cassian breaks into the place he was staying prior to his arrest and gets his credits, blasters and his late buddy Nemik’s excellent political manifesto back. He tries to get a message to Maarva, only to learn she’s dead.

Melchi suggests they split up, to double their chances of surviving so they can tell people about the Empire ignoring prison sentences and incarcerating people forever. Diego Luna is fascinating to watch in this scene, hiding his grief and acting like everything is cool. C’mon dude, talk it out with Melchi!

They part ways, and Cassian is clearly going back to Ferrix for Maarva’s funeral. Everyone is coming together for next week’s finale. What could go wrong?

Come back for more Easter eggs and observations next Wednesday, Nov. 23, when episode 12 — the season finale — of Andor hits Disney Plus. Santa’s Data: This Holiday’s Tech Gifts Are Creepier Than Ever
Supernova wants to make it easy to move design elements to code bases