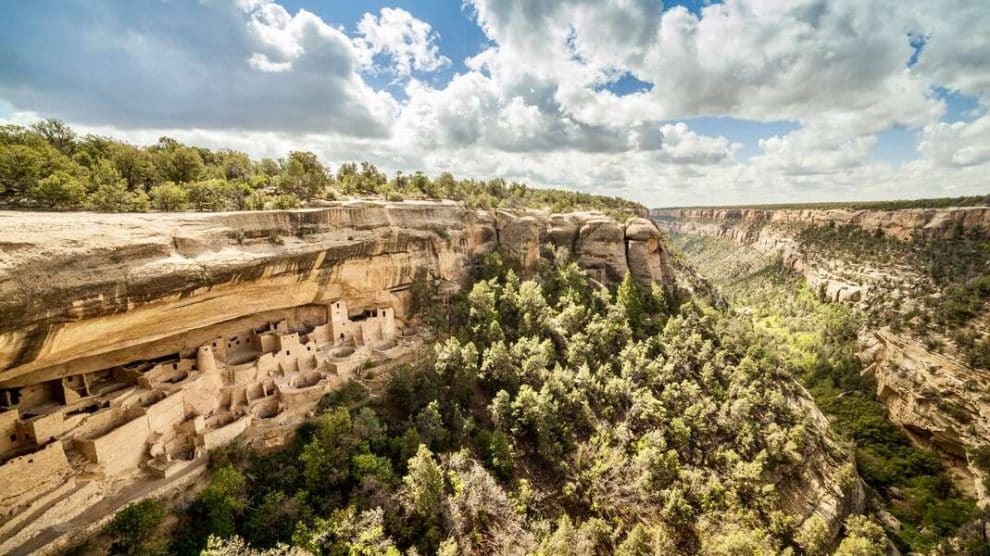 A series of crumbling rooms and towers span an impossibly broad indentation in a sandstone cliff. Gazing at the ruins, it’s an easy practice to envision the community of around a hundred Ancestral Puebloans who thrived here more than 700 years ago—cooking, laughing, and making music—though the former residents are long gone. This place, with its 150 sand-colored rooms and impressively constructed towers, is Cliff Palace, the largest cliff dwelling in North America. Sights like these are what southwestern Colorado’s Mesa Verde National Park is best known for, though it’s only part of what the park has to offer.

With more than 600 cliff dwellings (and more than 4,000 Ancestral Pueblo dwellings in total), Mesa Verde is a recognized UNESCO World Heritage Site and a dream come true for anyone who wants to visit some of the best-preserved archeological sites in the country. It also offers major appeal for wannabe astronomers and stargazers, with exceptional views of the night sky that have recently earned it a designation as the 100th International Dark Sky Park. Out of America’s 63 national parks, Mesa Verde is one of just 16 to earn this designation.

But there’s more to the national park than cliff dwellings and stargazing. While you’re there, you can also explore miles and miles of park trails, learn about the Indigenous cultures of the area, gaze at rock walls studded with petroglyphs, and witness some of the more than a thousand species of flora and fauna that call Mesa Verde home. No matter what you do, it’s sure to blow your mind. Here’s what to do in Mesa Verde National Park.

Hike a rugged landscape of canyons, mesas, and ruins

Take to the park’s 30 miles of trails to experience sloping mesas, rugged canyons, and expansive vistas. Difficulty ranges from a flat out-and-back trail that winds through pinyon-juniper forest to a trek that requires you to squeeze between boulders and descend narrow stone staircases. Hikes are made more difficult due to the high elevation and hot, arid climate, so you’ll want to be careful and carry lots of water. Mesa Verde’s trails are divided into three areas: Morefield Canyon, Chapin Mesa, and Wetherill Mesa.

In Morefield Canyon, you’ll find trails such as the Knife Edge Trail, which follows the path of an old road that was built in 1911 as the main access to the park. This trail leads to Montezuma Valley Overlook, where a phenomenal view is even more spectacular at sunset.

Chapin Mesa is where you’ll find rugged and adventurous trails with steep drop-offs, such as the strenuous Petroglyph Point Trail, a 2.4-mile round-trip route with scrambling, cliff-climbing, and ancient petroglyphs. Chapin Mesa is also home to most of the park’s ruins, including the Far View Community Sites, which can be viewed by hiking a .75-mile loop. Ancestral Pueblo people thrived in Far View’s mesa-top farming community for several centuries, long before the cliff dwellings were built.

Pueblo architecture can also be found on Wetherill Mesa, where the Nordenskiold Site #16 trail will lead you to the ruins of a 50-room cliff dwelling that was excavated in 1891. You can also witness 600 years of Pueblo history along the Badger Community Trail with four excavated mesa-top villages.

One note before you get hiking: All of Mesa Verde is an ancestral home that is sacred to 26 Native tribes. Please visit with respect by staying on trails and leaving cultural and natural resources where you find them.

Discover the history and culture of the Ancestral Pueblo Peoples

Learn how the Ancestral Pueblo peoples lived, farmed, practiced religion, and built their society in the 700 Years Tour. The 4-hour tour, led by a National Association for Interpretation (NAI)-certified guide, features pithouse villages that date back to the year 600 and cliff dwellings from the 13th century. The tour also guarantees you a spot on a 1-hour tour of Cliff Palace led by a National Park Service (NPS) ranger. The large cliff dwelling, which was likely a community gathering place with administrative and religious activity, is one of Mesa Verde’s most popular attractions. The structures were originally crafted from sandstone, wooden beams and mortar that have remained somewhat intact for hundreds of years—a true architectural marvel.

Stargaze in one of the world’s darkest places

When the sun sets, visitors can take in an unbelievable view of the night sky, which looks much the same as it did a thousand years ago to the Ancestral Pueblo people.Search the vast, dark sky for familiar constellations and far-away planets, and make a wish on any shooting stars that you see. As a newly certified International Dark Sky Park, Mesa Verde is one of the few places on the planet where the night skies haven’t been badly obscured by light pollution. This allows novice astronomers the chance to gaze at the heavens and be awed by the astrological wonders that appear.

If you want to stargaze at the park, plan to visit during a new moon for the darkest conditions. Numerous overlooks and pull-outs along the park road, including Geologic Overlook, Mancos Overlook, and the Montezuma Valley Overlook, provide expansive views of the night sky and remain open to the public throughout the night. For an overnight stay in the park, Morefield Campground and Far View Lodge are perfect places for stargazing and will occasionally host ranger-led evening programs. More astronomy-focused programming should become available at the park in 2023.

Observe wildlife from a safe distance

Wildlife viewing is a favorite pastime of many visitors to Mesa Verde National Park. Critters to keep your eyes out for include adorable mule deer, cottontail rabbits, frisky weasels, colorful collared lizards, mountain short-horned lizards, woodhouse toads, wild turkeys, black-chinned hummingbirds, and spotted owls. Dawn and dusk are the best times of day for wildlife spotting. As with any wildlife, it is best to admire from afar. Binoculars are your friend. And while you shouldn’t get too close to any of these animals, you’ll want to especially keep your distance from coyotes, black bears, bobcats, spotted bats, prairie rattlesnakes, and bull elk (don’t let the fuzzy antlers fool you – they will aggressively defend their territory!).

Go for a drive

There are a few worthwhile drives to put on your to-do list for your Mesa Verde visit. The 6-mile Cliff Palace Loop Road overlooks cliff dwellings and provides access to the Soda Canyon Overlook Trail. And although the popular Mesa Top Loop Drive is currently closed for construction, you’ll want to check it out once the scenic route reopens. In the meantime, you can still download the NPS’s audio tour to get an insider’s perspective on the history of Mesa Verde. The narrative is done by park ranger TJ Atsye, a Laguna Pueblo and direct descendent of the people who used to call Mesa Verde their home. When the road is once more open to tourists, you can listen to the audio tour as you drive, with ten stops along the 6-mile loop. Until then, the audio is still a wonderful way to learn about the park and the ancestry of its people.

Getting there and getting around

Located in the Four Corners region of Colorado, Mesa Verde National Park lies off Highway 160, between the historic mining towns of Durango and Cortez, Colorado. Both towns are accessible by daily flights. Mesa Verde is approximately 40 miles from Durango, 260 miles from Albuquerque, New Mexico, and 380 miles from Denver, Colorado.

No matter where you’re coming from, you’ll enter Mesa Verde via a steep, narrow, and winding mountain road. It can take around 2 hours to get in and out of the park depending on weather and traffic, so give yourself plenty of time.

Mesa Verde is open all year, but the best times to visit are in the spring and fall, when the weather is relatively mild. If summer is the only time you can come, be prepared to share the park with hundreds of other tourists, both on the roads and the trails. Summer temperatures can reach into the 90s and afternoon thunderstorms are common in July and August. Winter is a beautiful time to go, but many tours, lodging, and camping options close during the colder months, and some roads and trails may shut down due to snow. If you do come in the winter, look into self-guided opportunities like cross-country skiing, snowshoeing, and hiking. For safety, you’ll want to check the latest winter weather conditions and sign in at the Trail Register before heading out.

If you want to stay inside the park, you have two options. To commune with nature, pack a tent and a sleeping bag and reserve a campsite at the Morefield Campground. Located in a large, wooded area, the 267-site campground includes dry tent sites, 17 group sites, and—for those that want a cushier stay—15 full hook-up RV sites. You won’t be completely roughing it since campground facilities include free hot showers, laundry, access to firewood and other camping supplies, a gift shop, and a grocery store. If you stay during the summer, you can check out the all-you-can-eat pancake breakfast at Knife Edge Café (now that’s my kind of camping!). And if you bring your pup along, you can leave them at the Morefield Village Kennel when you want to visit some of the attractions that don’t allow dogs.

For a comfy bed and stunning views, book a room at the Far View Lodge. Situated 8,250 feet above sea level, the 150-room lodge features locally sourced furniture and fixtures, plus balconies that offer wildlife watching during the day and stargazing opportunities at night. The lodge is pet-friendly and has a dining room and lounge area.

Sharael Kolberg is a contributor for Thrillist. 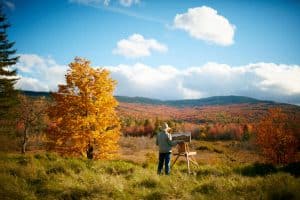 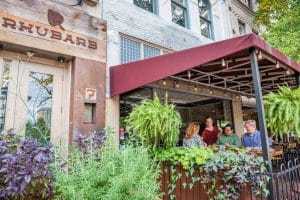 7 Reasons to Drive to Asheville This Fall 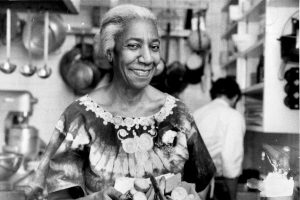 A New Menu Trail Celebrates the Life, Legacy, and Eats of the Grand Dame of Southern Cooking