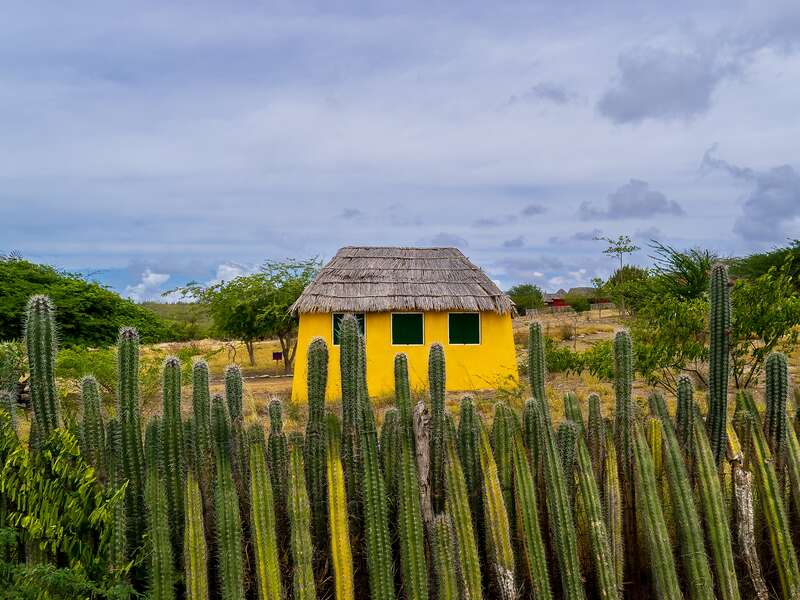 Most visitors who find their way to Bonaire stick to its outer perimeter—and for good reason: The Netherland Antilles island is enveloped by a turquoise blue protected marine park stocked with some of the best shore diving in the world. It’s why most people come here, after all. And if they’re not diving they’re kitesurfing, boating, snorkeling, or participating in all other manner of aquatic adventure.

But drive inland to the village of Rincón, and you’ll see the Bonaire’s heart. The oldest village of the island’s two, Rincón was built by the Spaniards in 1527, hidden enough to stay off the radar of pirates but elevated enough to survey the surroundings. Here you’ll still see evidence of a dwindling farming life in the form of kunuku, or plantations, plots of agricultural land protected by cacti fences that once belonged to the enslaved. Spindly, prickly, but also aesthetically interesting, it’s pretty obvious why these barriers were so effective in keeping wanted livestock corralled and unwanted wildlife out.

As Bonaire’s lucrative tourism industry continues its economic takeover, the agricultural kunuku life has withered. But there is one place where you can still connect with the island’s pastoral roots, and maybe even try your hand at building one of those fences (hopefully without sticking yourself): the Mangazina di Rei cultural center.

How do you preserve a colonized island’s culture when the external world is constantly threatening to swallow it? It’s a question that extends far beyond the Caribbean. One solution: Begin with tactile objects that serve as links to the past. In 1996, the Mangazina di Rei Foundation was established with funding help from the Dutch government, not only to preserve Bonaire’s heritage—an amalgamation of Indigenous, African, Caribbean, and European influences along with their own melting pot creole language, Papiamentu—but also to give Bonairian youth a place to congregate safely while helping senior members in the community stave off isolation.

The foundation’s almost two-century-old whitewashed building brims with a history of its own: A former government building, rations for the enslaved were once stored inside these walls. (After falling into disrepair, the building was rediscovered in the 1970s by a politician on an iguana hunt, which is very Bonaire.)

Plunge Into Adventure on This Tiny Southern Caribbean Island

From shore diving to donkey safaris, the biggest challenge in Bonaire is staying inside.

The complex’s main attraction is a museum, and it’s an excellent place for any visitor to start their exploration of the island. Here, you can place yourself in Bonaire’s colonial trajectory, from early occupation by the Indigenous South American Caquetio-Arawaks, to the arrival of Spanish conquerors, to, ultimately, Dutch settlers. And you’ll learn the reason the Dutch made their way from the Netherlands over to the southern Caribbean in the first place: salt, which they desperately needed to preserve their herring—or their “White Gold.” The salt pans are still there today, a striking visual of white pyramids and pink pans for those arriving to the island by plane.

To mine the salt, the Kingdom of the Netherlands needed manpower, but the Caquetio-Arawaks weren’t strong enough for the work they demanded. So they shipped them out and brought in a new set of laborers. On the walls of the museum, you’ll read about the so-called “Triangle of Trade,” where the Dutch moved goods like jewels from Europe to Africa, traded the items for people, and then carted them to the Caribbean and the Americas to exchange them for rum and spices. It’s something that even Izaïn Mercera, the center’s born-and-raised Bonairian operational manager, admits he wasn’t aware of until he started. “I learned the history at work,” he says. Which means that, at least for him, the Mangazina di Rei is very much accomplishing its goals.

Exhibits extend to natural resources and island wildlife. The museum covers Bonaire’s unique flora, fauna, and geology, delving into the ways in which the island’s limestone coral makeup was key in the development of everything from agriculture to architecture. You’ll learn why donkeys now roam the roadways (the Spanish who brought them in and subsequently left them to their own devices), and who owns the goats you might spot on occasion. (It’s farmers—their goats will go home as the sun goes down, unless they get bored beforehand and wander back.)

You’ll also chart the history of land management in Bonaire, from 100% government plantations to converting one-fifth of the island into a national park, plus the influences of various cultures on its cuisine. You’ll read about traditions and folklore collected through interviews with the residents of Rincón as their pictures hang nearby so you can put a face to their words. And they’ll give you links to extra resources should you want to discover more, like Archive Bonaire, Bonaire.tv for video clips, and bonairefamily.com for learning about Bonairian lineage.

This Colorful Caribbean Island Is Full of Hidden Beach Coves

Learn some words in Papiamentu (for starters, masha danki = thank you, hopi dushi = tastes good), and try out instruments like the conch and barí, which can be traced to Africa. “In Curaçao, they call it tambú, but here it’s more soft, so we call it barí,” says Mercera. “It’s the tradition during this time of the year to hear people playing on the drum—it was a way the slaves expressed emotions. However, some songs were purely gossip, but in code, so only some people know who they are singing about.”

And those local cacti come up again, this time in reference to the varieties of liquor that can be made from fermenting and distilling it. Want to taste it? The distillery is just down the street in Rincón, in its own historical digs.

Preservation is one thing, but how do you pass on the legacy of a waning culture? Bring the artifacts and traditions to life. Mercera is fond of saying that the Mangazina di Rei is where you can, “see, feel, and taste the culture of Bonaire.” But it’s not just talk. Musical heritage is transmitted through programs like Talento Kultural, which connects students with elders for folkloric singing, music, and dance lessons. These songs are then performed at Nos Zjilea, an exuberant festival which, since 2014, has fused education, botany, crafts, food, and live music into a big party on the last Saturday of each month, with all proceeds funneled back into the center’s educational offerings.

As it grew in scope, the festival’s very name shifted to reflect its evolving mission. “At first, it was called Culture Market, then it was called Creole Market, translated. And from there we decided to call it Nos Zjilea, because it was more than a simple market,” says Mercera. The name is now of Portuguese origin. “Nos Zjilea is when you’re in your nature—like Mickey Mantle playing baseball, or you’re a fish in the water. You’re in your element.”

Performances during the year are focused on four themes that mirror Bonaire’s eclectic makeup: Simadan, a harvest festival born of the kunukeros (or farmers), with its own call and response music; the Spanish festival of San Juan i San Pedro in June; the self-explanatory Musika Folkloriko; and, currently, Pone Barí Ronka, a tribute to the African barí drum.

During Nos Zjilea the museum is open for viewing amid the many craft stands, fresh juice purveyors, and food vendors with stews, curry, fish, and Funchi. Don’t miss out on homemade bread, straight out of the stone oven which you can observe—and smell—being cooked up on site. There’s also a new educational presentation each month, ranging from seminars on gardening to the symbolism of the Bonairian flag. Last month, it was Herbs as Medicine, a talk that embodied the Bonairian connection to the land.

“There were different types of herbs and their benefits,” says Mercera. “If I had to sum the benefits up, I would probably lie to you—one was good for blood pressure, another for diabetes. And one was meant for the women, let me put it like that.”

Each new Nos Zjilea theme is teased on the Mangazina di Rei’s Facebook Page via a video starring Mercera himself, always donning a straw hat. Keep an eye out for next month’s, and until then, you can always drop by the cultural park every Tuesday through Friday from 9 am to 4 pm. And if you plan on trying your hand at building a cactus fence, consider bringing along some gloves. 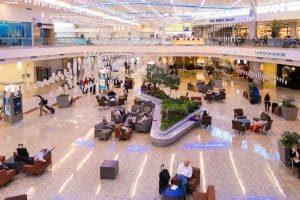 Where to Eat and Drink at Hartsfield-Jackson Airport in Atlanta 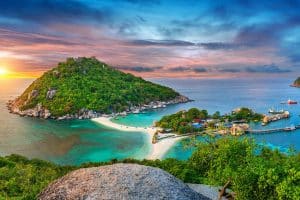 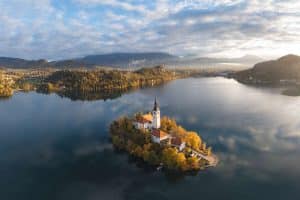 This Tiny Country Is the Green Heart of Europe

The Coolest, Weirdest, and Best Museums in Boston