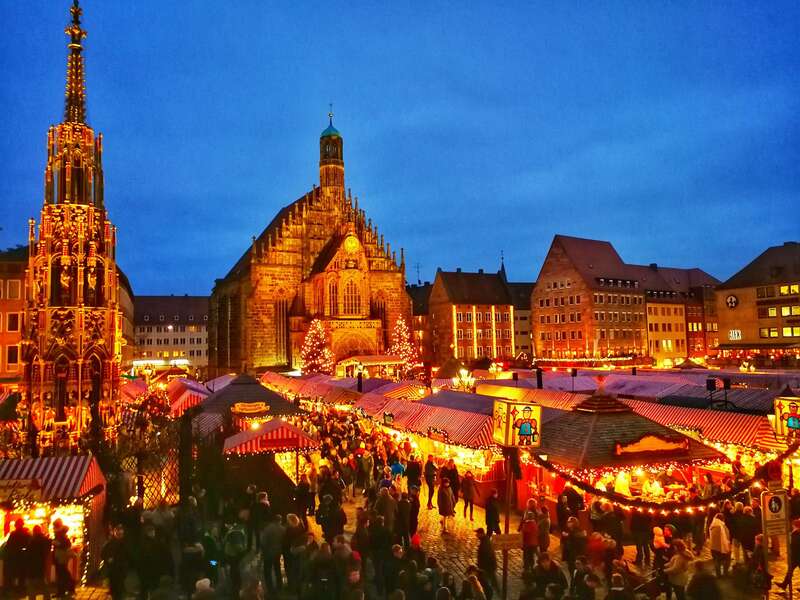 Nuremberg, centrally located in Germany, is an easy train ride to Frankfurt and Munich, which also boast some of the best Christmas markets you can find, so you can tickle your fancy on a holiday market spree.

If you want to keep the merry and bright feelings rolling, the Römerberg Christmas Market is a favorite in Frankfurt, set among the facade of rainbow-colored buildings (almost like the ones you’d find in Curacao) and an oversized, double-decker carousel. The stay is complete with lodging at the newly-remodeled and highly buzzed-about Westin Grand, which encourages guests to “play well” and “eat well,” with modern rooms and an expansive lobby decked floor to ceiling with lights and metallic Christmas decorations.

Munich’s main Christmas market in historic city center Marienplatz is an unsurprising show-stopper. It’s also conveniently located next to Viktualienmarkt: a year-round culinary epicenter with stalls owned by chefs and entrepreneurs who must undergo a lengthy application process to even be considered. Once approved, they can also only specialize in one type of cuisine, as to not compete with nearby businesses. Be sure to stop by Caspar Plautz’s booth to experience potato varieties you’ve never even heard of, fried, boiled, pureed, and prepared to your heart’s content.

Like Nuremberg and Frankfurt, the markets can get quite crowded, so a stay at the newly-open Scandic in the eastern neighborhood of Macherei will provide a much-needed respite with rooms that face the Alps.

Ambitious travelers can realistically knock out all three cities in a long weekend, creating a Christmas-filled itinerary that would even give Santa a run for his money. The Most Romantic Weekend Getaway in Every State Where to Go Hot Spring Hopping in Japan