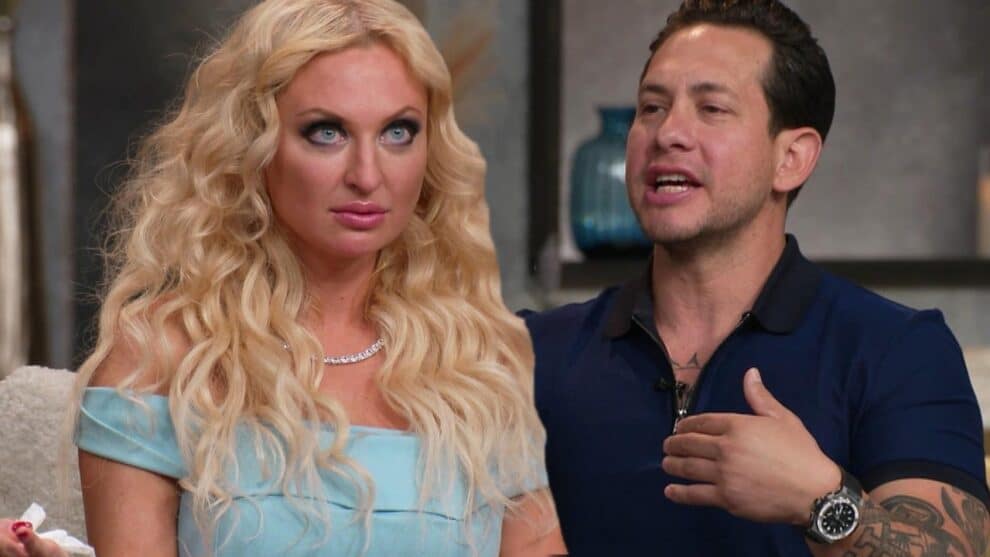 Natalie’s love interest, Josh, is making an awkward appearance on Monday’s 90 Day: The Single Life‘s tell-all special. In this exclusive clip from part one of the tell-all, Natalie and Josh are clearly not on great terms, and her fellow 90 Day Fiancé castmates call him out for his refusal to commit to her.

Natalie and Josh dated this season, but it’s been far from smooth sailing. Natalie is still technically married to her husband, Mike, and Josh has been hesitant to commit to her although they did sleep together. In the clip, host Shaun Robinson asks them about the status of their relationship and Josh says they’re still “seeing where it’s going” while Natalie rolls her eyes. When Josh is asked if he even considers Natalie his girlfriend, he laughs and says they haven’t had that conversation. When Natalie’s castmates call him out on it as well as Natalie’s cold attitude towards him, Josh says it’s Natalie that has “a lot to figure out” — namely, whether she’s done with Mike or not. Shockingly this season, Natalie asked Mike to take her back though Mike said he had been through too much when she left him in Sequim, Washington, and started dating other men. At the same time, she refused to break it off with Josh.

“I will not divorce for a guy who will not be there for me,” Natalie says in the clip. “And I don’t give a f**k what you think of me, honestly.”

Josh tells her he’s not asking her to get a divorce, and when Natalie is asked if she’s staying married, she replies, “It’s my personal choice why I’m staying married.”

“This is clear for me, I’m not his girlfriend,” she adds, referring to Josh. “So, why would I have to divorce Michael? Why do I have to put myself in a situation where I feel uncomfortable, insecure? Why? For who? Who is there for me, empty space? No, I’m not doing it.”

Part one of the 90 Day: The Single Life tell-all special airs Monday at 8 p.m. ET/PT on TLC and Discovery+.

During this season, Natalie wanted to reconcile with Mike after he continued to be there for her despite their split, giving money to her mom in Ukraine. Meanwhile, Josh offered her no support. However, Mike’s mom, Trish, is still clearly harboring bad feelings towards Natalie, calling her out for using her son to get to America. Watch the video below for more.

’90 Day Fiancé’: Mike’s Mom Confronts Natalie and Accuses Her of Taking Advantage Of Him (Exclusive) The Rookie Round Table: Was Nolan Wrong to Ditch His Mom? ‘Yellowstone’ Season 5, Episode 4 Is Coming November 27 — Here’s How to Watch Online
‘Percy Jackson and the Olympians’: A Thorough Breakdown of the Disney Plus Series’ Stacked Cast