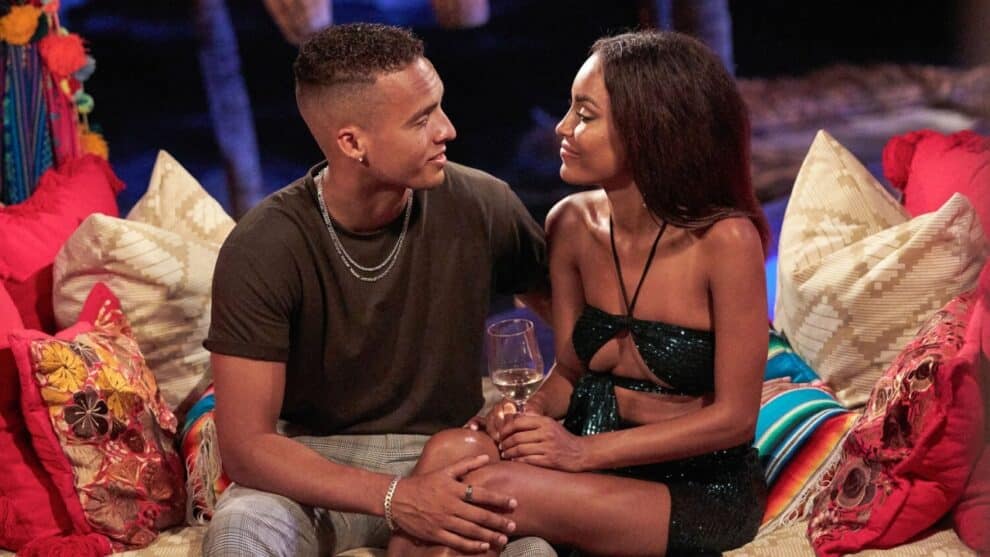 The beach is officially closed for the season. During part one of Bachelor in Paradise‘s season 8 finale, host Jesse Palmer announced that the time had come for the couples to make a decision about their future. Each duo proceeded to do just that to varying results, all of which ET is breaking down in the recap below.

After Mara made an early exit and Kate provided a big surprise at the rose ceremony, all but two couples left the beach. Those pairs set off on overnight dates as the possibility of a proposal loomed.

Keep reading to see where each couple left things on part one of Bachelor in Paradise‘s season finale.

While Logan went into the rose ceremony feeling “good” about “laying down the foundation for a real relationship” with Kate, she wasn’t so sure.

When Logan called her name at the rose ceremony and told her, “I still believe in you and me,” she didn’t return the sentiment, and, instead, rejected his rose.

“We have had some unforgettable moments on the beach. You also told me that I was critical, looked down on you, not warm enough and stimulated by the drama, when in reality those are projections that I feel from you,” she said. “When Jesse told us earlier to ask ourselves if we were happy or in love, the answer for those questions for me is no. I know what I want and this isn’t it. So Logan, no, I will not accept this rose.”

With that, both Logan and Kate left the beach, with the former complaining about getting “a stern talking to about her criticism,” and the latter already looking ahead to the future.

“I want something that’s effortless and that flows and that shouldn’t feel like this much of an uphill battle in the early stages. We should be dry humping in the corner,” she told the cameras. “Please God, bring me a grown a** man with a big d**k and a bigger bank account.”

Though she accepted Tyler’s rose, Brittany was still uncertain if things would work out between them.

“It wouldn’t make sense to leave together unless he says I love you,” she told the cameras, before Tyler did just that.

“The night of the Sadie Hawkins dance, when we were passing the ball back and forth together and you punted it over, I loved you right then and there,” Tyler confessed, with Brittany quickly replying, “I can wholeheartedly tell you that I do love you.”

Despite their love for each other, the couple agreed that they weren’t ready to get engaged just yet. Even so, they were looking ahead to the future. “He’s my person for sure,” Brittany told the cameras.

While Joey was “100 percent ready” to take his romance with Shanae to the real world, she was “scared, nervous, anxious” about doing so.

“The age gap kind of scares me. You living with your parents, that scares me,” she told him. “I’m looking for someone a little bit more independent. I just feel like I’m like your fun, cool aunt and not your girlfriend… I want a man.”

Joey called Shanae’s comments “disrespectful,” before he made his way off of the beach.

“At the end of the day I’m looking for a husband, not a TikTok boyfriend,” Shanae told the cameras through tears, just as Justin and Florence amicably ended their romance.

With that, the twins left Paradise together.

Arguably the most volatile couple of the season didn’t end things on a positive note. Leading up to the rose ceremony, Genevieve was “so afraid” that Aaron wouldn’t ask her to stay. Though the pair did end the night together, Aaron had a change of heart the next day.

“I fell in love with you and that’s a fact. I wouldn’t do anything different,” Aaron told Genevieve. “… Whenever there’s something wrong, you’ve wanted to leave. You’ve packed your bags and you’ve been on the road. That’s scary for me.”

“I need someone that can give me security… For that reason, I don’t really think I can continue my relationship with you outside of Paradise,” he continued. “It’s heartbreaking, because, like I said, I do love you, and I always will cherish this time with you and I would not do anything any different.”

Genevieve sat in stunned silence as Aaron delivered his breakup speech, and he ended up walking away without her having said a word.

Once Genevieve had a moment to come down from the shock, though, she was mad. “I hate how he turned that on me… He just did not mention one thing that he did it was all what I did,” she said, before pulling her now ex-boyfriend to talk again.

“You’re trying to rewrite everything and make it seem like you did nothing wrong,” she told him. “I reacted because of what you did.”

That sounded A-OK with Genevieve, who told him, “I promise you I don’t want you to.”

As Aaron was driven away, he expressed annoyance at how his breakup conversation with Genevieve went down. “At the end of the day. I was glad we spent the summer together and now I’m not,” he said. “F**k. Way to ruin that.”

“I’m very angry at how that ended… God forbid he’s ever wrong. That little boy,” Genevieve told the cameras. “… I just wasted my time on a child and that’s big facts.”

From the most high-drama couple to the lowest drama one, Danielle and Michael shared a sweet final moment on the beach.

“I feel so lucky, Michael,” Danielle said. “I just didn’t know it could be like this.”

“Ever since Laura passed, I’ve had difficulty giving and receiving love. For the longest time I have felt just incredibly lost, wandering, numb, which for empathetic, emotional people like us is a death sentence,” Michael said, before showing Danielle a compass he bought for himself, his son and his late wife shortly before her death.

“I bring it with me everywhere, so I don’t get lost. On the inside of it, it says, ‘I find you wherever you are.’ I can’t help but think that this compass brought me to you, in some crazy way, in some crazy place,” he said. “I’m pretty certain of that.”

Danielle responded by telling Michael that she does “really respect and honor” his love with Laura, and added that she “can’t wait” to meet his son, James.

“She would love you. She’d be happy it was you,” Michael told Danielle. “So am I.”

The pair then agreed to leave Paradise together, though not engaged.

“He’s just the most special human that’s ever come into my life,” Danielle told the cameras. “I’m ready for real life with Michael… I just want him around forever.”

Michael agreed, stating in a confessional, “I’m excited to see how she interacts with James. I know she would be a wonderful addition to our family.”

Brandon and Serene continued their seemingly perfect romance by further declaring their love for each other.

“I am so humbled and blessed to have you in my life,” Brandon told Serene, before she responded, “I thought I had found my person before, but this is so different and it’s because of the way you love me… I’m going to love you forever.”

After a double date with Victoria and Johnny, the happy couple set off for their Fantasy Suite, where they once again marveled over their feelings.

“I’m so appreciative of how you trust me with your heart… I don’t even have a second thought in my mind that this isn’t going to work out. It’s not scary at all,” Serene said. “… I’ve never been so in love with someone. It’s because of who are and the things you do for me. I know this is the real deal.”

“I’m never letting you go,” Brandon replied. “… I’m going to love you for the rest of your life.”

Though Johnny felt “scared as s**t” about a potential engagement, he wasn’t ready to end things with Victoria.

“I’ve never been treated so good… I feel at home. I just know that I love you,” Victoria told her beau, who concurred, telling her, “I love you too.”

Victoria pressed Johnny a bit, telling him, “I can see a life with you and I just want to be sure that’s where you’re at too.” While he wasn’t ready to commit to an engagement, he was sure about one thing: “I’m not letting you go.”

After that conversation, the pair decided to stick around and leave the possibility of an engagement on the table. Then they had a fancy double date with Serene and Brandon — during which Victoria said she could see Johnny as the father of her children and Johnny said that he knew “100 percent this is my person” — before setting off for their overnight date.

In the Fantasy Suite, Victoria and Johnny bonded over not feeling worthy of love until they met each other, but Johnny still couldn’t commit to getting down on one knee.

“I can see myself marrying you… I want to be engaged. I want a family. I want all those things,” Victoria said. “… I’m 1,000 percent ready and I see that with you. It’s not scary when I think about it with you.”

To Johnny, though, “That’s scary… This is a huge deal. It’s a big deal for me. I’m not just going to be like, ‘Yeah, I want to’ because you say you want to… I feel like engagement and things like this, I don’t know if you’re ever ready.”

Johnny’s reveal was “heartbreaking” to Victoria, who told the cameras, “If we’re not on the same page then I don’t know if we’ll be together.”

That conversation will continue on Tuesday night’s finale, with Jesse promising that “the drama is not even close to over.” After reunion confrontations between Logan and Kate and Rodney and Eliza, fans will see the outcome of the two remaining romances.

For Jesse, that leaves just three questions: “Will they commit? Will they get engaged? Or will panic set in?”

The second part of Bachelor in Paradise‘s season 8 finale will air Nov. 22 on ABC. Follow along with ET’s coverage of the show to stay up to date on all the drama on the beach.