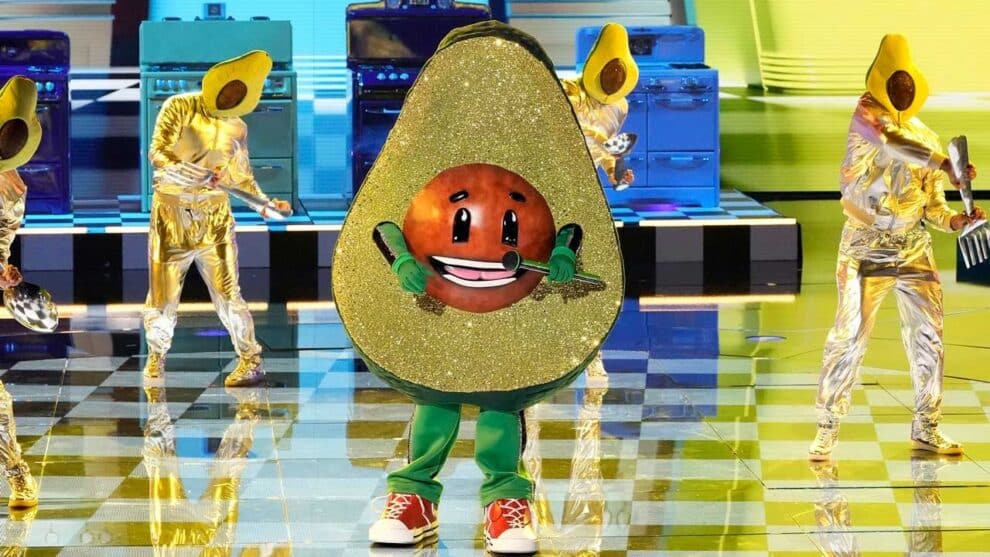 The Masked Singer returned on Wednesday for an evening of laughs with the Comedy Roast Night, which featured two new characters taking the stage, and a lot of jokes about Nick Cannon’s ever-increasing number of children.

Stalwart panelists Robin Thicke, Ken Jeong, Jenny McCarthy and Nicole Scherzinger were all on hand to weigh in on the acts and make wild, left-field guesses about the costumed contestants’ secret identities.

The Bride — a giant pink dinosaur in a wedding dress who sings like a grunge punk rocker — returned to the stage and faced off against new constants Snowstorm and The Avocado.

All three clandestine celebs sang their hearts out, but only one was able to move on to the next round. Here’s how everything played out, and which characters ended up having to “take it off!”

First up for the night was The Bride, who again pulled out all the stops with an engaging and remarkably physical performance of Billy Idol’s “White Wedding” that saw him jumping around and giving a full-throttle rendition of the iconic tune.

“Can I just say, here comes the bride ready to snatch that mass singer trophy?” Jenny exclaimed after the act.

While this was The Bride’s second time performing, the panelists’ guesses were just as eclectic as they were last week, with the foursome guessing The Bride is everyone from Red Hot Chili Peppers’ Flea to Matthew McConaughey.

Next up was Snowstorm, who stunned in a remarkably glittery ensemble that sparkled like ice in a blizzard.

The captivating performer owned the stage with a pitch-perfect rendition of Ariana Grande’s “Thank U, Next” that blew the panel away.

“I think you are even bigger than a snowstorm. You were like a snow blizzard. You came here and dominated the competition,” Jenny gushed.

“She’s got one of the coolest tones of the entire season,” Nicole added. “It was driving me crazy because I feel like I know the voice. It sounded familiar, like a pop star voice right there.”

The third and final singer of the night was The Avocado, who delivered a lively and comedic cover of Ray Charles’ “Hit the Road Jack” that was packed with fun puns and cheeky jokes.

“You know what, I can tell this is not your first time on stage,” Ken shared. “You’re an entertainer, and you really made us laugh during that performance.”

After all the songs were sung, it was time for the audience to vote on who would move on to the Battle Royale round, and whose Masked Singer journey was already at an end.

Despite delivering one of the more exceptional performances of the night, The Bride was the first singer the audience chose to break up with.

After the judges made their final guesses, The Bride unmasked and revealed themselves to be none other than iconic pro-wrestler and rocker Chris Jericho!

When asked why he chose to be a pink dinosaur in a wedding dress, he joked, “It’s always been inside of me my whole life!”

“This costume was amazing. It’s the best costume that I’ve seen on the show. And I’m just disappointed that I got beaten by an avocado.”

With The Bride out of the competition, the Battle Royale came down to Snowstorm and The Avocado, who each performed verses from “You’re So Vain” by Carly Simon. However, the differences in their styles of performing led to a fairly definitive victory from Snowstorm.

This meant it was time for The Avocado to step out from behind his green-skinned costume, and the singer proved to be just the right choice for a Comedy Roast Night — Adam Carolla.

When asked about his time on the show, Carolla joked, “You know, ever since I was a young lad, growing up in North Hollywood, California, I dreamt of this moment. And a scant 47 years later. here I am!”

“So this is a dream realized,” he added with a laugh. “And if I die tonight… well, I’m going to be pissed, actually.”

The Masked Singer semi-finals kick off next Wednesday at 8 p.m. ET/PT on Fox.

Check out the gallery below for a look at every single contestant who has ever had to “take it off” throughout the history of the show!