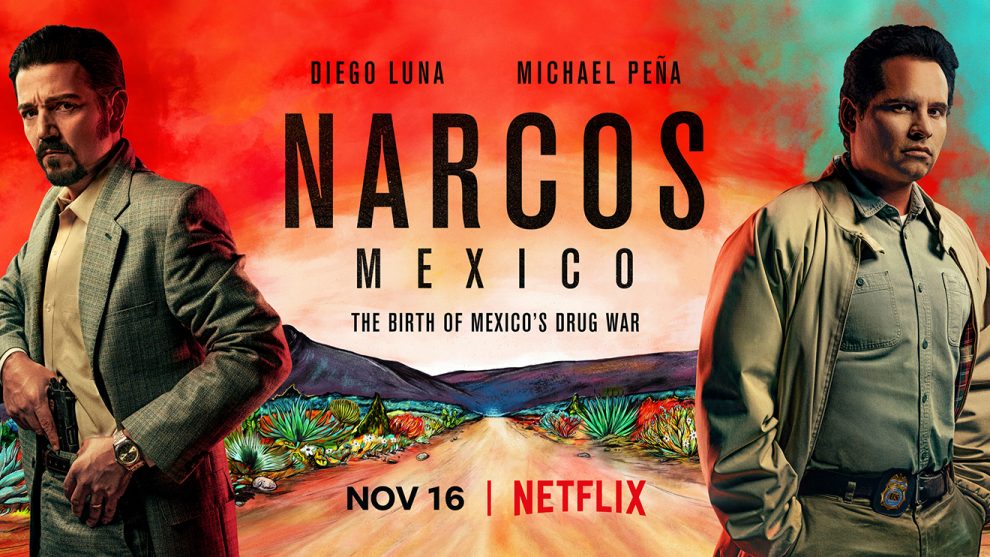 ¡Bienvenidos a México! The addictive drama continues to follow the drugs and the money as it moves into new territory.
Series will Launch On Nov. 16th

This exciting Netflix project, ‘NARCOS: MEXICO’ starring Diego Luna and Michael Peña. The series has an amazing cast. Besides Diego Luna and Michael Peña, you could also enjoy the talent of other Hispanic actors such as Joaquín Cosío (Quantum of Solace), Alyssa Diaz (Ray Donovan, The Rookie), Alejandro Edda (Fear the Walking Dead) and Gerardo Taracena (Apocalypto) to name a few.

Narcos: Mexico will launch as a new Netflix original series on November 16th. Shifting away from Colombia, where Narcos spent three seasons, Narcos: Mexico will explore the origins of the modern drug war by going back to its roots, beginning at a time when the Mexican trafficking world was a loose and disorganized confederation of independent growers and dealers.

Witness the rise of the Guadalajara Cartel in the 1980s as Félix Gallardo (Diego Luna) takes the helm, unifying traffickers in order to build an empire. When DEA agent Kiki Camarena (Michael Peña) moves his wife and young son from California to Guadalajara to take on a new post, he quickly learns that his assignment will be more challenging than he ever could have imagined. As Kiki garners intelligence on Félix and becomes more entangled in his mission, a tragic chain of events unfold, affecting the drug trade and the war against it for years to come.

Video Surfaces of George Lopez Getting Into Dispute With Pro-Trump Heckler
The Puppeteer And Voice Of Big Bird And Oscar The Grouch, Caroll Spinney, Is Retiring From SESAME STREET