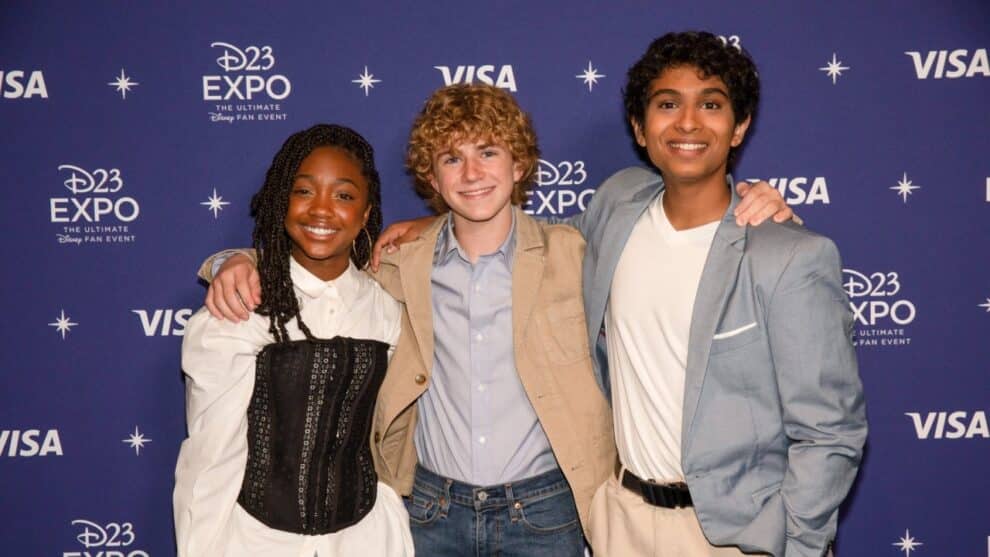 Fans of Rick Riordan’s Percy Jackson novels have a lot to look forward to. Almost a decade after the second and final installment of the film series premiered in theaters, the books are being adapted for a Disney+ series, Percy Jackson and the Olympians.

This time around, Riordan is intimately involved with the adaptation’s production; the author revealed in a blog post that he serves as executive producer, co-writing the pilot episode and creating a series bible for the series with co-showrunner Jonathan E. Steinberg, as well as planning the plot for the first season and creating ideas for potential future seasons. So now, fans are not only getting a second chance at fully immersing themselves in Riordan’s magical world, but they’re doing so with the author’s full permission!

It also doesn’t hurt that the series is shaping up to have an impressively stacked cast. The stars of the upcoming series are being gradually announced, but it already boasts a blend of new faces and notably well-known stars.

Before we get ahead of ourselves, here’s a guide to everything we know about Percy Jackson and the Olympians, including a look at the growing cast and whether fans will see actors from the previous installments involved in the project.

Differences Between Percy Jackson Films and the Disney+ Series

Riordan has never been shy to express how he felt about the movies adapted from his books. The author has always been honest about never having seen the two Logan Lerman-led films but says he doesn’t need to know they’re not his Percy Jackson.

Two years ago, a fan tweeted Riordan asking if a scene in 2010’s Percy Jackson & the Olympians: The Lightning Thief had been censored for streaming. “They should censor the entire thing,” Riordan replied in a since-deleted tweet. “Just two hours of blank screen.” (A sequel, Percy Jackson: Sea of Monsters, was released in 2013.)

“I judge them from having read the scripts, because I care most about the story,” he added. “I certainly have nothing against the very talented actors. Not their fault. I’m just sorry they got dragged into that mess.”

Riordan’s five-book series centers on Perseus “Percy” Jackson, a 12-year-old boy who discovers he’s the son of a Greek god. Percy was aged up to a teenager in the films to suit Lerman’s older look but the series has stuck to the book’s depiction of the titular hero.

Much like the first film, the series’ first season will closely follow the first book, in which Percy winds up at a summer camp for fellow demigods and learns more about his lineage and how to use his newfound powers. And when Percy is framed for stealing Zeus’ lightning bolt, he and his friends embark on a frantic journey to find the real thief to prevent an all-out war between the gods.

“The filming has followed the book story very closely, almost as if the author were involved himself!” Riordan wrote in an Aug. 13 blog post. “Sure, there are small tweaks and changes here and there, which were mutually agreed upon, but the biggest difference is the ‘value added.’ You will get peeks at character backstory, foreshadowing Easter eggs of things to come, and nuances in Percy’s family history that I think you will love.”

“The neat thing about revisiting this tale, almost 20 years after I first wrote it, is that I get to address some of the questions that fans have asked me over the years: ‘What does this mean?’ ‘Why does this happen the way it does?’ ‘What would happen if —?’ It’s been really satisfying and fun,” he added.

Percy Jackson and the Olympians Cast

The Disney+ show features a healthy mix of newer actors — many of whom will play the kids at Camp Half-Blood — and seasoned stars.

Riordan announced that the search for the next Percy Jackson had begun last April. A year later, the author shared that The Adam Project‘s Walker Scobell snagged the role of the titular hero. “It was obvious to me and the rest of the team that Walker had the perfect mix of comedic timing, sweetness, rebelliousness, snark and heroism to embody our hero Percy Jackson,” Riordan wrote in a blog post.

At D23, Scobell described his Percy as “witty, sarcastic, and hot headed.” “I promise you, I will always try my hardest every single day to bring Percy Jackson to life for all of us,” he said.

A month later, Variety announced that the show’s central trio was rounded out with Leah Sava Jeffries and Aryan Simhadri, who will portray Annabeth Chase and Grover Underwood, respectively.

Welcome home demigods ⚡ Meet Annabeth, Percy, and Grover. Get ready for #PercyJackson and The Olympians coming to @DisneyPlus. pic.twitter.com/l6mhR20WCw

“She is a brilliant actor who can break our hearts, make us laugh, and have us cheering for her all in the same scene,” Riordan wrote in a post announcing Jeffries’ casting. “Leah is exactly the way I imagined Annabeth in the books: smart, strong, and courageous, a true daughter of Athena who has zero patience for the foolishness of a certain Seaweed Brain. Watching her act with Walker and Aryan, I saw Annabeth Chase come to life. As soon as you see her on the screen, you will know what I mean. The Wise Girl has arrived!”

Annabeth is the brilliant strategist and daughter of the Greek goddess Athena who teams up with Percy at Camp Half-Blood and beyond. Jeffries described her Annabeth as “a daughter of wisdom” who is smart, nice, supportive, and a great sword fighter, but you have to impress her to get in her circle.

Of Simhadri, Riordan wrote that he “had me laughing out loud with his delivery and timing. He has a mixture of sweetness, humor, and internal toughness that is perfect for our favorite satyr.”

Simhadri described Grover as “the protector of the group” who guides Percy and Annabeth through their adventures.

Boardwalk Empire‘s Virginia Kull will star in the series as Percy’s mom, Sally, whom Riordan said “moved us to tears” with her performance at the table read for the first episode. She’ll share the screen alongside Timm Sharp, who will play Percy’s stepfather, “Smelly” Gabe Ugliano.

Fans will also recognize Glynn Turman, who plays Chiron, Percy’s centaur mentor who begins the tale disguised as one of Percy’s teachers, Mr. Brunner. Megan Mullally will play Alecto, one of the Furies who stalk and torment Percy, initially also disguised as an algebra teacher at his school.

Attention, campers! 🔱 Meet more of our amazing guest stars on #PercyJackson and The Olympians, coming to @DisneyPlus.

The Diary of a Future President star Charlie Bushnell will play Luke Castellan, the head of the Hermes cabin and a key player who helps set Percy off on his quest in The Lightning Thief. Dior Goodjohn will play Percy’s Camp Half-Blood nemesis, Clarisse LaRue.

Olivea Morton has been cast as Nancy Bobofit, Percy’s tormentor at Yancy Academy. The Flash‘s Jessica Parker Kennedy will portray Medusa, the snake-haired gorgon wronged by the gods who tries to turn Percy and his friends into stone.

Adam Copeland, better known as WWE Hall of Famer Edge, joins the cast as Ares, the belligerent god of war. Riordan gave Copeland a glowing endorsement, writing, “I knew Adam was our Ares as soon as I saw his audition tape. He absolutely nailed it… This guy IS Ares the way I imagined him in the Percy Jackson series. He obviously knew the part, loved it, and was having WAY too much fun being the god of war. He even got a Harley-Davidson motorcycle so he could practice riding and get into character. That is commitment! Can’t wait to see him go mano a mano with Percy Jackson? Me neither!”

Lin-Manuel Miranda, creator of Hamilton and composer behind Disney’s Encanto, will play Hermes, the god of messengers, commerce, and thieves. Hermes isn’t supposed to appear until the second book, The Sea of Monsters, but Riordan explained in a blog post that fans will understand why he was introduced early “when you see the episode in question.”

A message from the messenger god himself: @Lin_Manuel Miranda is Hermes in #PercyJackson and the Olympians, an Original series coming to @DisneyPlus! pic.twitter.com/91tDQDudAw

The author said that after writing Hermes into the show, he couldn’t get Miranda’s voice out of his head, and reached out to him about playing the character, assuming it was a long shot. “I knew he would be the perfect person to bring Hermes to life in all his complex glory,” Riordan wrote, adding that Miranda “delivered a performance that ignites the screen.”

Jay Duplass and Timothy Omundsen are the most recent additions to the cast, with Variety announcing their inclusion earlier this month.

Duplass will play Hades, the god of the Underworld. Per the official character description, “Hades feels like an outcast from his family and a misunderstood genius. He holds a grudge for past wrongs and plays his cards close to the chest.”

Omundson will play Hephaestus, the god of blacksmiths. “Hephaestus became disabled when he was thrown off Mount Olympus as a babe,” his character description states, per Variety. “Despite that, his strength is legendary, and his capacity for kindness and mercy sets him apart from his brothers and sisters in the dog-eat-dog world of the gods.”

The Disney+ series is currently in production in Vancouver. While the streamer has yet to announce a release date, it’s likely that fans won’t be visiting Camp Half-Blood until 2024.

Logan Lerman Is Down to Play Poseidon in ‘Percy Jackson’ Series