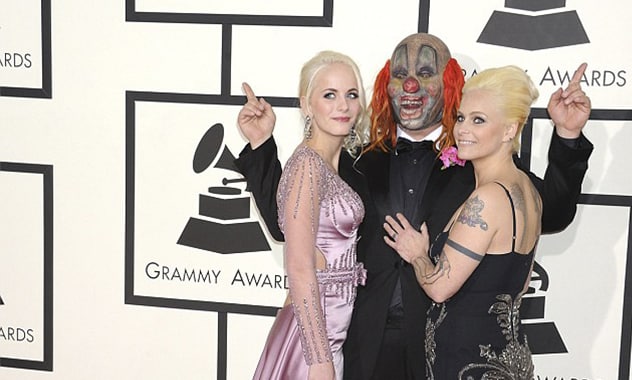 Well, that is certainly a great way to get noticed.


Surrounded in music’s most beautiful pop stars, metal musician Shawn Crahan managed to upstage all those in their couture clothes at the Grammy Awards in Los Angeles, California, on Saturday.

While a heavy metal band is unlikely to get a look in at the glamorous event, the Slipknot founder was so terrifying in a deranged clown mask, people were literally stopping in  their tracks.

Despite the band may have a cult following after 20 years together, mainstream performers and fans clearly had not been exposed to the mask wearing antics of the group.

Many did not know what to make of the drummer – whose stage name is Clown #6 – as he stalked his way down the red carpet.

Shawn – who was joined by daughter Gabrielle and wife Chantel – did not remove the mask, which featured badly painted on clown makeup and tufts of orange hair on either side of its bald head, for the entire carpet.

The 44-year-old musician was not perturbed by the carpet’s hot lights as he – along with the rest of the metal band – plays concerts in full costume.